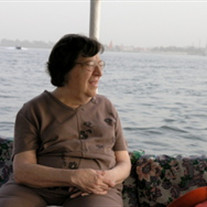 Born in Columbus, Ohio of Italian immegrant parents in the early fall of 1930. Angie was her parents second child, preeceeded by Mary and followed by David. Her mother died when she was 16years old. Angie attended grade and high school in the Columbus area, suffered a polio infection when she was 12, overcoming its grip on her legs to grow into a beautiful young lady. Met her future husband when introduced by his sister Ellen, their first date was attending an Ohio State University football game. They were married on May 26, 1951 and celebrated their 60th anniversity this past May. They lived in Columbus, Ohio from 1951 to 1962 where their two sons were born, Larry in 1954 and Rick in 1961. Moved to New Jersey in mid year of 1962 with Chuck's first field assignment after joining Eastman Kodak. Their daughter Emily was born there in 1966. A new field assignment moved them to The Bay Area of San Francisco in 1970. Yet another change in assignment called Chuck back to the home ofice, in Rochester, NY in 1976 where she lived until her death. Each new location found her agonizing over the the separation from old friends while challenging her to find new ones and establishing a new home for her family. She was not dissapointed, new friends materialized, drawn to her sincerity and desire to see differences as a point of interest, to be embraced; her sense of humor also added to her appeal. During their marrage she enjoyed extensive travel in the US, and camping in many of the National Parks. She was able to travel with Chuck on a number of business trips to national printing industry conventions and meetings. After Chuk's retirement in 1989 they concentrated on travel to visit Larry's and Emily's families on the West coast and Rick's family on the East coast when they were in the country. Their last "over-sea's" assignment was in Egypt where she visited in February and March of 2010. She saw many amazing sights there including King Tut's underware!! Angie was a dedicated mother, who raised three great kids without the aid of a "how-to" manual or a Google web site, relying on instinct and an internalized set of values that focused on her sense of human worth. She was also a mother that knew when to "let-go" in spite of her deep love of each of her kids and knowing the anguish she would have to endure with the separation. She found the birth of each of her six grandchildren a joyus experience; being on hand for the birth of Gabrielle, her first, and getting to hold her moments after her birth. Waching each of the grandchildren grow and achieve provided joy and much to talk about as she continued to regale her close friends with their exploits. Angie's health and her ability to move freely without pain was a growing issue. She had suffered two small, brain-stem, strokes in the past 5 years and had a knee replacement. The primary factors contributng to her declining mobility, were arthritus and "post-polio syndrone" issues. She passed, peacefuly in her sleep. PDF Printable Version

Born in Columbus, Ohio of Italian immegrant parents in the early fall of 1930. Angie was her parents second child, preeceeded by Mary and followed by David. Her mother died when she was 16years old. Angie attended grade and high school in... View Obituary & Service Information

The family of Angeline Rinehart created this Life Tributes page to make it easy to share your memories.

Born in Columbus, Ohio of Italian immegrant parents in the early...

Send flowers to the Rinehart family.