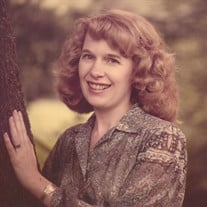 Anna passed away peacefully May 26th, 2019 after an extended stay in the hospital. She was born March 9th, 1940 in Sutton, West Virginia to Clarence Franklin Bosely & Edith Marie Whytsell. Four years after Anna was born, a sister Andrea was added to the family. Anna accomplished many of the goals she set for herself as a young woman. One was to receive a college education which Anna achieved in 1962 by earning her B.A in Library Science with minors in English and Education from West Virginia University. True to her interest in learning and academia, Anna graduated with many more than the required number of courses due to her desire to sample many fields. She graduated with honors and was elected to Phi Beta Kappa. Anna then went on to exceed her original goal by earning herself a scholarship to attend school to receive her Master of Library Science degree from the University of Illinois in June 1963. Anna continued to be a lifelong learner, enrolling in classes at Umpqua Community College in Roseburg after she had attained her Master's degree and was already working in her field. Later Anna took classes at Clackamas Community College and continued to do so even in retirement. There was no limit to the wide variety of classes that Anna took, from real estate finance and appraisal, training for travel agents, mystery writers, macramé, nonverbal communication, sociology, Oregon history, and business administration, to name just a few. Another goal of Anna’s was to have ownership in a home, which Anna had the pleasure of doing twice. Anna was a dedicated saver and very attentive to her finances. Never organized at home in the traditional sense of keeping neat and tidy files as you might expect of a librarian, Anna nevertheless, kept meticulous mental track of what was in every pile, box, basket or file, although her system made no sense to anyone else. Anna decided early in life that she didn’t want to have children, but her friends were always very important to her. As a young woman, Anna honed her skills as a hostess and enjoyed trying new recipes, keeping track of her guests’ likes and dislikes, and keeping records of the occasion, including the guests, food, and drinks served, and how everyone enjoyed themselves or occupied their time together. Anna was truly a gifted cook and yet what impressed her second husband John was her ability to make strawberry Jello with bananas in it. In 1963, Anna married Allan Robert Gould in Braxton County West Virginia and later they moved to Eugene and Roseburg, Oregon so that Allan could attend school for his Master's degree. Allan and Anna divorced amicably in 1975 and remained friends for the rest of her life. Anna met her second husband John in Roseburg while he was working out of town and romance soon blossomed between them. John and Anna were married in 1979 and remained together until John’s death in April of 2016. In 2013 Anna developed significant health problems and began losing weight. At one point she got down to 65 pounds and was put on hospice. Somehow Anna found the strength to rebound and was able to return home to the house she and John had owned their entire married lives. Soon after, in 2016 John passed away and Anna’s health made it necessary for her to sell the house and move into an apartment at Somerset Independent Living in Gladstone. Her amazing friend of 40 plus years, Edna assisted by Edna’s husband Elton, took the lead in cleaning, organizing, obtaining repairs, holding an estate sale, and eventually selling the house for Anna. Before John, Anna’s late husband, passed away, he asked a friend, Chuck Branham to take care of Anna should anything ever happen to him. Little did either of them know that within a matter of weeks, John would be gone. Chuck took the request to heart and what began as a promise to a good friend, ended in a very special relationship of their own between Chuck and Anna. Chuck extended both the quality and quantity of Anna’s life with his selfless care of her and willingness to be on call literally 24 hours a day, 7 days a week, often coming to the rescue in the middle of the night. Anna leaves behind a sister, sister and brothers-in-law, nieces and nephews, many good friends, and her devoted caregiver, Chuck Branham A service will be held Friday, June 21st, at 1:30 p.m. at Hillside Chapel in Oregon City.

Anna passed away peacefully May 26th, 2019 after an extended stay in the hospital. She was born March 9th, 1940 in Sutton, West Virginia to Clarence Franklin Bosely & Edith Marie Whytsell. Four years after Anna was born, a sister Andrea was... View Obituary & Service Information

The family of Anna Marie VanKommer created this Life Tributes page to make it easy to share your memories.

Send flowers to the VanKommer family.