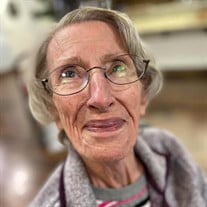 Arlene Rose Sprenger, age 85, passed peacefully away in her sleep in the early morning hours of Friday, January 14, 2022. She left us as quietly as she lived her life. Formerly of Oregon City, Oregon, she was living in Canby, Oregon at Countryside Living at the time of her passing. Her passing has freed her from a long fight against the insidious disease of Dementia. Born January 18, 1936, to Theodore and Freda Diehl in Bismarck, North Dakota, she was raised on the family farm. Arlene was third from the youngest of five brothers and three sisters, of which one sister is still living in Mott, North Dakota. Mom graduated in a very large senior class of 14 students from Carson High School on May 25, 1954. Her favorite childhood past-times were playing the piano, visiting with friends and the not so favorite, helping on the farm. She was deeply involved in her church, Emmaus Congregational Church in Carson, North Dakota and was confirmed on June 25, of 1950. Her love for the Lord continued her entire lifetime. Arlene met Daniel Sprenger at church. A great love grew between the two of them and when Dan came back from attending Chicago Evangelistic Institute in Iowa, he asked for Arlene’s hand in marriage. They were married on August 14, 1955, and moved to Portland, Oregon in 1956. Arlene was active in her local community, her church and in the early years, worked as a secretary for various employers. After Arlene and Dan adopted their two children, she became a stay-at-home mom, taking great pride in raising her two terrific children, supporting her husband, sewing clothes, preserving food grown in the garden or u-picked, keeping a spotless home, and helping neighbors. She continued to enjoy playing piano, chocolate, listening to music, jigsaw puzzles and gardening. Later on, she became one of the first employees at the Clackamas Town Center Sears when it opened in 1981, and retired in the late 1990’s Arlene is preceded in death by her parents, her brothers, and sisters except one, and her loving husband of 57 years. She is survived by her daughter, Lisa Sweet, her son Randy and his wife, Rosie, two granddaughters, Jori Lindquist and husband, Nate, and Jenae Sweet. She has three great-grandchildren Olive, Hunter, and Juniper. Our family would like to thank Countryside Living in Canby, Oregon for the attentive care they provided, to Bristol Hospice and their team of highly caring and professional people, for Pastor Bruce Marten of First Evangelical Presbyterian Church of Oregon City for many years of loving pastoral care and all the friends and family who loved Arlene. If desired, in lieu of flowers, friends and family may make memorial contributions to Bristol Hospice, 10365 SE Sunnyside Road, #340, Clackamas, OR 97015.

Arlene Rose Sprenger, age 85, passed peacefully away in her sleep in the early morning hours of Friday, January 14, 2022. She left us as quietly as she lived her life. Formerly of Oregon City, Oregon, she was living in Canby, Oregon at Countryside... View Obituary & Service Information

The family of Arlene Rose Sprenger created this Life Tributes page to make it easy to share your memories.

Arlene Rose Sprenger, age 85, passed peacefully away in her sleep...

Send flowers to the Sprenger family.