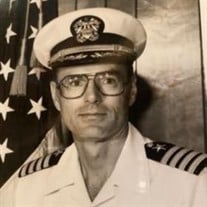 Arthur F. Schroeder Jr., 79, passed away on February 10, 2020 at his home in Lake Oswego, OR after a long battle with Parkinson’s Disease. He was born on August 10, 1940 in Hibbing, MN to Arthur F. Schroeder Sr. and Gerry Schroeder. Art grew up in Madison, WI where he graduated from Edgewood High School in 1958. After high school he then attended The University of Wisconsin at Madison, where he was a member of Naval ROTC and received a Bachelor’s Degree in Art. Upon graduation in 1962, he was commissioned into the US Navy where he honorably served for 26 years until retiring as a Captain. Art had an extensive and diverse career that included serving on a minesweeper off the coast of Cuba during the Cuban Missile Crisis. He next was assigned to the building of the USS Bradley, where he was a plank owner until 1966. During Vietnam, he was the officer in charge of the APL-26 in support of the US riverine force in the Mekong Delta. Art returned home from Vietnam where he met and married Pixie. They were happily married for 51 years. Together they had two children, Max and Heather. After starting their family, Art was selected to attend the Naval Postgraduate School in Monterey, CA where he earned a Masters Degree in Physics. He made the transition from Surface Warfare to Engineering Duty where he worked in the Navy’s High Energy Laser development program, eventually becoming the Commanding officer of the Naval Ordnance Missile Test Station at White Sands,NM. After his retirement in 1988, he began his second career as the director of the Maui Space Surveillance Complex, tracking satellites over the Pacific gathering data on both near and deep space objects. In 2001, Art officially retired and filled his time tinkering on his classic cars with his grandchildren, exploring the family’s genealogy, playing golf and watching a variety of collegiate and professional sports. By far, Arts greatest joy was seeing his children grow up with integrity and raise families of their own. He was blessed with six grandchildren who kept him busy with requests for help on science, math and history assignments. He was a loyal supporter of his grandchildren, attending many- a tennis match, swim meet, soccer game, dance recital and musical performances. Art is survived by his spouse, Pixie Schroeder of Lake Oswego, Or; His son Max Schroeder and his wife, Dina of Las Cruces NM: His Daughter Heather Cook and her Husband, Rory, of West Linn Or: Six grandchildren, Evan, Molly and Will Schroeder and Riley, Emma and Scarlett Cook; Five Brothers and one sister. A memorial service will be held at Willamette National Cemetery in Portland, OR at 1:00pm on April 23, 2020. A reception to celebrate his life and memories will follow after the services at The Springs Living, 3900 Kruse Way Place in Lake Oswego, OR. As an expression of sympathy, memorial contributions may be sent to: www.ohsu.edu/foundation (designate Parkinson’s research or clinical care), or Navy Marine Corps Relief Society at www.nmcrs.org

The family of Arthur Frederick Schroeder created this Life Tributes page to make it easy to share your memories.