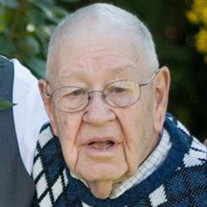 Ashley Arden Kirkman died Saturday, March 25th 2017 in Milwaukie due to natural causes. Ashley was born March 12th, 1925 in Benkelman Nebraska to Ivan and Ruby Pickens Kirkman. He grew up on the family farm and lived through the Great Depression and the dust bowl in the midwest. He was the fourth of five children in their home. Before he graduated from High School, he entered the military service on March 28th 1944. He served as a Gunner's Mate 3rd Class in the Navy in the Asian Pacific front in World War 2. After just over two years in active duty he was honorably discharged and then enrolled in the University of Nebraska in industrial education. Ashley married Opal Joan Rauch December 27th, 1952 at the Benkelman Presbyterian Church. The next summer they moved to Newport Oregon where Ashley took a job at Newport High School. While living in Newport, their marriage was blessed with a son, Michael. Ashley moved to Gladstone and he took a position teaching woodworking at Oregon City High School. About a year after they moved Ashley and Opal were divorced and he was given custody of Michael and raised him for the next eight years as a single parent. Ashley married Alta Haag August 31st, 1963 in Vancouver Washington. They each brought children into this marriage, Ashley brought Michael, and Alta brought Fred and Carrie. After about two years into their marriage they adopted Christy as a five day old baby, thus completing their family. Ashley taught woodworking, small engines, and started the district’s electronics program. He retired from Oregon City Schools at the age of 58. Just before his retirement Ashley and Alta moved to Beavercreek. About 18 years ago, Ashley suffered a mini stroke and they moved to Gladstone. For a little over a year, they have lived in Homewood Heights Assisted Living Center. Just 12 days after his 92nd birthday, Ashley passed away. He is survived by his wife, Alta; his two sons, Michael and Fredrick; his two daughters, Carrie and Christy; seven grandchildren and seven great-grandchildren. A memorial service for Ashley will be held 10:30 am Saturday, April 1st, at the First Evangelical Presbyterian Church of Oregon City. A memorial fund has been set up in his name at the church to support teen mission trips. Contributions can be sent to First Evangelical Presbyterian Church, P.O. Box 1718; Oregon City, OR 97045

Ashley Arden Kirkman died Saturday, March 25th 2017 in Milwaukie due to natural causes. Ashley was born March 12th, 1925 in Benkelman Nebraska to Ivan and Ruby Pickens Kirkman. He grew up on the family farm and lived through the Great Depression... View Obituary & Service Information

The family of Ashley Arden Kirkman created this Life Tributes page to make it easy to share your memories.

Send flowers to the Kirkman family.