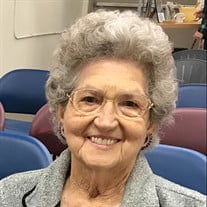 Birdie Smith went home to be with her Lord and Savior on Thursday, May 24, 2018, after a short battle with cancer. She was born to Reuben and Hassie Edens in Freck AR on July 28, 1924, the 10th of twelve children. She married the love of her life, William Jackson (Jack) Barnes in 1940, and gave birth to two children, Louise and Ron. They farmed in the Ozarks of northern Arkansas until 1950, when they moved to Union Gap WA. Jack worked in construction, and Birdie worked at several jobs when it was necessary to help with family finances, including a nursing home, a jeans factory, and a cannery, but she most enjoyed being a homemaker. They eventually lived for a short time in Zillah WA, then moved to Yakima WA, where they lived until 1968. In 1964, after their children were grown and married, they began to take in foster children. The first was Wally, an 18-month old Yakama Indian boy, and over the next few years they took care of several other children of varying ages. They eventually adopted Wally in 1968, and Birdie cared for him and provided a home for him until her death. That same year, they were able to fulfill their long-time dream of buying a small farm near Toppenish WA. Tragically, just six months later, in February of 1969, Jack was killed in a construction accident, leaving Birdie a young widow and single mother. With her characteristic strength and faith in the Lord, she made a good life for herself and Wally. A couple of years later, she met Francis Lee (Frank) Smith of Wenatchee WA at a friend's wedding, and in June 1972 they married. Frank had two grown children, Dan and Vicki, who she took into the family as her own. She and Frank lived in Wenatchee, in a long and happy marriage, until Frank's death in 2015. They traveled extensively in their motor home, and spent many happy times at Thousand Trails campgrounds. In June 2017, Birdie and Wally reluctantly moved from their home into an assisted living apartment in Portland OR where they could both get the care they needed and be close to daughter Louise and her family. Birdie loved the Lord with all her heart, and that love radiated to everyone around her. In turn, everyone loved her. She was very active in the Wenatchee First Assembly of God as long as she was able to. Everyone who knew her truly loved her. She most enjoyed doing for others, cooking, laughing, and having friends and family around. She is so loved and will be so missed by her children, grandchildren, great-grandchildren, and great-great-grandchildren, as well as other family and her many friends. She was preceded in death by her parents; five brothers and five sisters; her husband, Jack; her husband, Frank; and her daughter, Vicki Smith Campbell. She is survived by one brother, Amos (Carol) Edens of Surprise AZ; daughter Louise Slawson of Oregon City OR; son Ron (Joyce) Barnes of Zillah WA; Wally Barnes of Portland OR; son Dan Smith of Yakima WA; 8 grandchildren; 16 great-grandchildren; 5 great-great-grandchildren; and many nieces and nephews. The family would like to thank the staff at Brookdale Sellwood Assisted Living and Kaiser Hospice for their loving and compassionate care of Birdie, making her last months pleasant and comfortable. In lieu of gifts, please consider donations to Wenatchee First Assembly of God, 1520 McKittrick St., Wenatchee WA 98801.

Birdie Smith went home to be with her Lord and Savior on Thursday, May 24, 2018, after a short battle with cancer. She was born to Reuben and Hassie Edens in Freck AR on July 28, 1924, the 10th of twelve children. She married the love of her... View Obituary & Service Information

The family of Birdie Smith created this Life Tributes page to make it easy to share your memories.

Birdie Smith went home to be with her Lord and Savior on Thursday,...