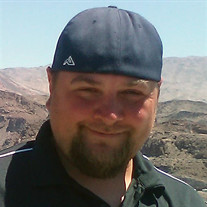 Brent Alan Herren, 41, went to be with his Savior, Jesus Christ, on Thursday, January 31, 2019, after having received care at the Portland VA Medical Center. Brent was born in Milwaukie, OR on April 15, 1977, to Pat Millen and Warren Herren, and was the youngest of three immediate siblings. From an early age, Brent loved playing sports and was proficient in baseball and football, having received awards and accolades from Oregon City High School, from which he graduated in 1995. Brent entered the military in 1996, received basic training at Ft. Sam Houston in San Antonio, TX, trained as a medic at Ireland Army Clinic at Ft. Knox, KY, and was stationed at Camp Casey in South Korea as a member of the 1st Battalion, 503rd Infantry Regiment, 2D Brigade, 2D Infantry Division. He was discharged with honors at the rank of Specialist in 1999. Brent married Anna Balbi (Herren) in July 2000, with whom he has three children, Brooke, 13, Colby, 11, and Logan, 8. Brent did all he could to give his children the best in life. As a huge sports fanatic, he encouraged his kids to play and even coached their baseball, softball, and football teams. He was known around his community as being a great father and coach. Brent also leaves behind his girlfriend, Sarah Limbourgh and her two children, Brock (14) and Beth (11), who he adored as his own. Brent is survived by his mother and father, Pat and David Millen, his brother and sister-in-law Scott and Michelle Millen and their 4 children, his sister and brother-in-law Laurie and Rick Severson and their 2 children, his sister Aubrey Millen and his oldest sister Wendy Takano, as well as numerous aunts, uncles, and cousins. Brent will be interred at Willamette National Cemetery. A Memorial Service of his life will be held Saturday, February 9th at 11:00 am at Oregon City Evangelical Church, 1024 Linn Ave., Oregon City, Or, 97045. During his time in the hospital, Brent received extraordinary care from the ICU team at the VA Medical Center. The family is deeply grateful for the compassionate care extended to all in their reach. To remember Brent, please send donations or volunteer in his name to the Portland VA Medical System (https://www.portland.va.gov/giving/).

Brent Alan Herren, 41, went to be with his Savior, Jesus Christ, on Thursday, January 31, 2019, after having received care at the Portland VA Medical Center. Brent was born in Milwaukie, OR on April 15, 1977, to Pat Millen and Warren Herren,... View Obituary & Service Information

The family of Brent Alan Herren created this Life Tributes page to make it easy to share your memories.

Brent Alan Herren, 41, went to be with his Savior, Jesus Christ,...

Send flowers to the Herren family.