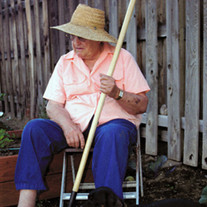 Cecilia Wilhelmina Schieffer Erickson &#8211; Autobiography &#8211; written April 1999 (written by Cecilia for a student who was studying senior citizens) I was born on the homestead at the foot of Rocky Butte. This was about thirty miles... View Obituary & Service Information

The family of Cecilia Wilhelmina Erickson created this Life Tributes page to make it easy to share your memories.

Send flowers to the Erickson family.