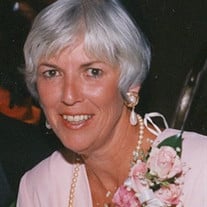 Chris Bair was born on April 17, 1943 in Seattle, Washington. Her parents were Elizabeth and John Jones. She grew up in Tacoma along with her sisters Kathy and Pamela, and brother Bill. Chris graduated from Wilson High School in 1961 and went to college at Washington State University (WSU) to study social work in Pullman, Washington. She graduated from WSU in 1965. Chris and Jim Bair first met in the fall of 1963 and became college sweethearts. They were married on June 20th, 1965 at the Mason Methodist Church in Tacoma, Washington. Chris was married to her best friend and soulmate, Jim, for 44 years. As a young married couple, Chris and Jim first lived in Marysville, Washinton and then moved to Cheney, Washinton near Spokane where they started their family. They eventually settled in the Portland, Oregon area starting in 1974. Chris and Jim raised and served as a role models for their two boys, Matt and Jeff Bair. Chris loved her 5 granddaughters (Tatum, Sophie, Riley, Luci, and Mia) and two daughter-in-laws (Becky and Rita). In her professional life, Chris was a loved and respected elementary school teacher for 27 years. For hobbies, Chris loved to read, walk, travel, relax at home with Jim, and hear about her grandchildren. There is much to remember and much to be thankful for as we remember Chris Bair and the way she shared her life with those around her. Each of us gives gifts of ourself to those we share life with. These are gifts that no one can take away. Though we are gone, these gifts remain with those to whom we have given them. Chris gave gifts of herself to us which have become a part of us, and cannot be taken away. We give thanks for her life, and for the ways she shared it with us. PDF Printable Version

Chris Bair was born on April 17, 1943 in Seattle, Washington. Her parents were Elizabeth and John Jones. She grew up in Tacoma along with her sisters Kathy and Pamela, and brother Bill. Chris graduated from Wilson High School in 1961 and went... View Obituary & Service Information

The family of Christopher Megan Bair created this Life Tributes page to make it easy to share your memories.

Send flowers to the Bair family.