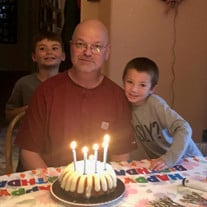 Dennis John Barnes was born on June 7, 1965 in Klamath Falls, Oregon and he passed away on October 12, 2020 in Oregon City, Oregon surrounded by family. The way Dennis died is just like how he lived: he wrote his own rules. He fought authority and paved his own way. If you said that he could not do it, he would make sure he could. Our famous saying is that “It’s a Barnes thing”. He was a rare combination of someone who had a love of life and a firm understanding of what was important- the simplicity of living a life with those you love. Dennis was a fighter. He made sure to hold on long enough to not miss his daughter’s wedding. His achievement he is most proud of was his daughter, Jessica Barnes, and his two grandsons, Tyson, eight years old, and Landon, six years old. Dennis enjoyed watching his Nascar races, hunting with family, cooking the most amazing ribs, he loved watching OSU football and baseball games, most of all, smiling and laughing with his grandsons. Although he loved to play progressive rummy, his daughter Jessica was able to outwit him, and he was always so confused about how she did it. Although he was a man of little words at times, we all enjoyed his presence. His laughter was so contagious that it would have everyone laughing in the room with him. He loved his family so much. The impact he had on others in his life is immeasurable. He touched so many people’s hearts. As he now watches us from above with Dale Earnhardt Sr. drinking a Coors Light, he could not be happier knowing we will all be together once again to celebrate his life lived. Dennis is survived by; his daughter Jessica Barnes-Henke (Jason), two grandsons Tyson and Landon of Central Point, mother Cheryl Chatburn-Ross of Oregon City, father Marlin Barnes of Merrill, brother Chris Barnes (Melissa) of Oregon City, sister Nicole Claybaugh (Doug) of Klamath Falls, and aunt Kathryn Parker of Happy Valley.

Dennis John Barnes was born on June 7, 1965 in Klamath Falls, Oregon and he passed away on October 12, 2020 in Oregon City, Oregon surrounded by family. The way Dennis died is just like how he lived: he wrote his own rules. He fought authority... View Obituary & Service Information

The family of Dennis John Barnes created this Life Tributes page to make it easy to share your memories.

Send flowers to the Barnes family.