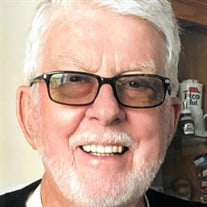 The full and successful life of Dennis H. Marsh ended quickly and peacefully on Thursday, April 29th with his wife, Gwen, by his side. Dennis was a 10-year survivor of lung cancer, a disease he fought courageously and repeatedly overcame odds that surprised even those treating him. But for those knowing him well, overcoming the odds was never doubted. Dennis was a life-long resident of Clackamas County. Born at home in Oregon City, he lived his entire adult life in Gladstone with his wife of 61 years. They raised four children and their dedication to family encouraged quite the brood. Upon his passing, his lineage encompassed 4 children, 12 grandchildren, 17 great-grandchildren, and 3 more great-grandchildren due this Fall. Of this, he was most proud. Dennis’s full life is best outlined in three paths. Many non-family members remember him most for his career path. It was remarkable for its alignment with the American dream. In 1968, Dennis purchased a single ambulance from Willamette Falls Community Hospital for $6,000; every penny of which was borrowed from a family friend. His work ethic and attention to detail allowed him to progress quite quickly in this evolving industry. His company, Willamette Falls Ambulance Service, through expansion and acquisition soon serviced most of Clackamas County. In 1976 he was given the opportunity to purchase Buck Ambulance Service and his operations expanded into Multnomah County. Over the next 15 years under the operating umbrella of Buck Medical Services, he secured exclusive franchise agreements to perform all emergency ambulance transports originating in Clackamas and Multnomah Counties, and Clark County, Washington. This remarkable success story concluded in 1993 when Dennis sold his operations to a national company known as American Medical Response. At the time of sale, Dennis operated daily 75 ambulances and employed 375 paramedics, EMTs, and support personnel. In recognition of his success, he was the 6th individual to receive the Lifetime Achievement Award from the American Ambulance Association. Dennis’s second path is marked by the pursuit of hobbies and community. Using what was gained by the sale of his ambulance company, Dennis was able to fulfill a lifelong dream—the purchase of a 2,000-acre ranch along the Deschutes River, just north of Maupin, Oregon. In addition to harvesting alfalfa and winter wheat, he developed the largest Asian water buffalo herd west of the Mississippi. The buffalo experiment was a love-hate, twice putting him in the hospital but providing stories he loved sharing. Dennis also pursued relationships in his beloved community of Gladstone. In addition to frequenting city council meetings, fundraising for school athletics, financially supporting most anything that involved kids, he could routinely be found along the Clackamas River dispensing essentials to those less fortunate as part of the Father’s Heart Street Ministry. Most of all, he loved spending time with those that serve as members of the Gladstone Fire and Police Departments, and the School District. Dennis’s greatest fulfillment came from his faith and family. He was always quick to attribute much of this to his wife, but his deeds proved otherwise. Faithfulness and church involvement was always essential to him; he genuinely appreciated the brothers and sisters in Christ from his nearly lifelong membership at Clackamas Bible Church. Throughout his life and particularly in later years, it was his devotion to family that resonated so dearly. His son and daughters marveled at the impact grandchildren and great-grandchildren had on him. The little ones softened the rough edges and always made a good day better. He loved the laughter, to hear the stories, and receiving hugs. Adult grandchildren came to revere his experiences and counsel; they marveled at his ability to make complex matters appear simple. His sage advice will be sorely missed but his love and legacy lives on in each one of them. Dennis was dearly loved by those that knew him. We will forever miss his guidance, sense of humor, example, and his friendship. In addition to his wife Gwen, Dennis is survived by son Terry, daughters Lori, Denise, and Tracy, and brother Rod. A memorial service is tentatively planned for July 22, 2021, at the Gladstone High School athletic stadium beginning at 10:00 AM. Should changes be necessary to accommodate pandemic protocols, updated information will be available on Facebook Page, “Dennis H Marsh Memorial Wall”. In lieu of flowers, the family prefers donations to be made in Dennis’s honor to the Gladstone Education Foundation or The Father’s Heart Street Ministry. Link to Dennis H Marsh Memorial Wall. https://www.facebook.com/profile.php?id=100067343035733 Gladstone Education Foundation: https://www.gladstonefoundation.org/donate-c1l6c The Father's Heart Street Ministry: https://tfhstreetministry.com/give/

The full and successful life of Dennis H. Marsh ended quickly and peacefully on Thursday, April 29th with his wife, Gwen, by his side. Dennis was a 10-year survivor of lung cancer, a disease he fought courageously and repeatedly overcame odds... View Obituary & Service Information

The family of Dennis H. Marsh created this Life Tributes page to make it easy to share your memories.

Send flowers to the Marsh family.