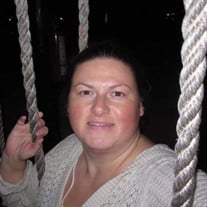 Dione Frigaard Hubred was born September 17, 1970 in Jefferson City, MO. When Dione was 2 months old, her family moved back to Oregon, where she lived the majority of her life. While attending Clackamas High School, Dione spent time as a candy striper, which inspired her desire to pursue a career in nursing. After graduating high school, Dione joined the US Navy and became a Corpman, completing her training as a field medic. She was stationed at Bremerton Naval Hospital in Washington, then moved to Camp Pendleton in California, serving a total of 4 years. After leaving the Navy, Dione became a mom to Lars Hubred in 1994. Shortly after giving birth to Lars, Dione started working towards her nursing degree at Clackamas Community College (CCC). She was an incredibly hard worker, balancing raising Lars as a single mom and working nights as a CNA while finishing her degree. Dione graduated from CCC in July of 2002 and began working at Portland Providence, where she spent her entire nursing career. Dione continued to work nights as a charge nurse, while building a tight-knit web of colleagues in the nursing field who became close friends. Her passion for nursing was equally matched by her love of family, friends and her many hobbies. Dione was a fantastic cook and enjoyed sharing recipes at family gatherings. Her enthusiasm for traditions such as quilting, crafting, knitting, cooking, baking, and canning was infectious, inspiring others to take up those hobbies and join in the fun. She was an avid reader and horror movie aficionado. Always thinking of others, Dione loved spending time with and doing things for the people she loved, whether it was making quilts or scarves, creating a family recipe book as a keepsake or organizing family gatherings. Her best-loved adventure each year was the annual Cotton Family Reunion. Her favorite place was at the coast for this camping trip, surrounded by family and playing games, holding contests, cooking good food and telling off-color jokes that would always inspire her famous booming laugh (uff-da!). Dione was always the life of the party, showing up with card games and encouraging everyone to start playing. Her love for others and her natural inclination to help others was well-known. She was beloved - everyone who met her loved her, and she made fast friends with anyone. If anyone needed help with anything, Dione would be the first to show up, whether it was to stay a night in the hospital after someone’s surgery or just to help with something small - no request was too big or too small. Diones fighting spirit helped her beat cancer and heart surgery. In an instant, Dione’s full, beautiful life was cut way too short, leaving so many people behind who miss her terribly. She passed away December 7, 2020 at the age of 50. But she loved fiercely and unconditionally, and those who knew her were lucky to be loved by her, and love her in return. She was a beloved mother, sister, and daughter and is survived by her son Lars Hubred, parents Brian and Marilee Frigaard, and siblings Dana Batchelor and Aaron Frigaard. A memorial service for Dione will be held at a later date due to the COVID-19 pandemic. Please check back periodically for more information.

Dione Frigaard Hubred was born September 17, 1970 in Jefferson City, MO. When Dione was 2 months old, her family moved back to Oregon, where she lived the majority of her life. While attending Clackamas High School, Dione spent time as a candy... View Obituary & Service Information

The family of Dione Elaine Hubred created this Life Tributes page to make it easy to share your memories.

Send flowers to the Hubred family.