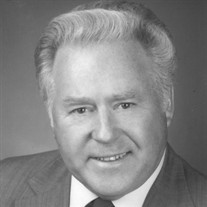 Donald G. Andersen Sr.(85) died July 7, 2017 at home surrounded by his family. He was born in Red Willow, Canada on April 5,1932 to Gerald and Mabel Andersen. He spent his youth in Washington and California before settling in Oregon City, Oregon. Don is survived by his wife of 65 years, Joan Andersen; his children Denise Andersen Rolen(Roger), Debbie Rutledge (Rick), Donald Andersen Jr. (Jennifer); his sisters Beck Smith, Dixie Livingston (Al); his grandchildren Andy Rolen (Desiree), Morgan Fetzer (John), Donald Andersen III (Chelsea), Bailey Andersen, Tanner Rutledge and his 3 little greats Nora, Reed and Brooks. Don graduated from Oregon City High School in 1950. He married his high school sweetheart Joan Smith, September 9,1951. Don began working at Crown Zellerbach at the age of 16. He joined the U.S.Navy in 1951, serving six years. After returning from the service he returned to his job at the mill. While working at the mill he attended Portland State University. In 1962 he started his teaching career at Gardiner Junior High in Oregon City. He taught Social Studies, coached football and wrestling. He loved working with kids and they loved him. In 1972 he moved to Oregon City High School where he worked as a Work Experience Coordinator. He placed countless students in jobs and careers throughout the community of Oregon City. Don served on the Oregon City Commission for 2 terms and enjoyed his time serving as mayor. If he believed a change was good for the people of Oregon City he would stay focused and put in whatever was necessary to make improvements for the city and its people. After retiring from Oregon City School District in 1991 he was elected to the Oregon City School Board. He served on the school board for 12 years always putting children first and helping support teachers. Don was born to serve others. He continued volunteering on the Mt View Cemetery Board and putting in endless hours of time with his beloved Oregon City Optimist Club. He loved the clubs commitment to our Oregon City Youth. Grandpa may have been his greatest job title. He loved and supported his grandkids, slipping them a little cash now and then, taking them to his mountain, or maybe a plane ticket to his cabin in Alaska for a fishing adventure. The great grandkids had a special place in his heart. Don’s service will be Thursday, July 13, 2017 at Oregon City Evangelical Church at 2:00 pm. A reception will follow at the Pacific Crest Ballroom (Oregon City Elks). In lieu of flowers the family suggests memorial contributions be sent to Oregon City Optimist Club, PO Box 1301, Oregon City, 97045

Donald G. Andersen Sr.(85) died July 7, 2017 at home surrounded by his family. He was born in Red Willow, Canada on April 5,1932 to Gerald and Mabel Andersen. He spent his youth in Washington and California before settling in Oregon City, Oregon. Don... View Obituary & Service Information

The family of Donald G. Andersen Sr created this Life Tributes page to make it easy to share your memories.