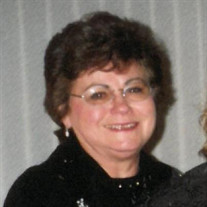 Dorothy Jean Rowland passed away on January 23rd with her children present. She was 84 years old. Her battle was over. She went to be with her Lord. She was born in Bennett, Colorado on May 4th, 1935 to Chester and Lois Stice. She graduated High School from Boone High School in Boone, Colorado. Shortly after High School, she married Merle Rowland. They lived in Pueblo, Colorado for a short time and then moved to Denver. She also lived in Omaha, Nebraska, and Butte, Montana before moving to Milwaukie, Oregon. She has lived in Milwaukie for the past fifty years. Jean was the mother of four children. Merle, Nancy, Tim, and Kim. She was the grandmother to ten and a great-grandmother to eight. She loved being a wife, mother, grandmother, and great-grandmother. She loved to travel as she had been in several places around the world, she had been on many cruises, and many trips to Colorado to see family. She enjoyed watching her kids, grandkids, and great-grandkids play basketball and soccer. She worked for the North Clackamas School District for 15 years. She worked and enjoyed working for Oregon Wilbert Vault Company until she retired at age 66. Merle, her husband, passed away in 2009. Shortly after that, she had cancer removed from her. During this time, she took her kids on a couple of cruises. In 2013 she married Charles Hadduck. Soon after that, she had a stroke. As time went on travel became more difficult. They spent their time together going for rides to the beach and just about anywhere close to home. She attended Clackamas Bible Church for 50 years. She enjoyed being part of that church serving there. She is survived by her husband Charles Hadduck; Children Merle Jr. Rowland (Shelly), Nancy Beeler (Lonnie), Tim Rowland (Melinda), Kim Rowland; grandkids Kristen Hamilton (Corry), Lonna Jenck (Joel), Nathan Rowland (Desiree), Korey Landolt (Ron), Aaron Rowland (Jill), Shawn Rowland, Jordan Rowland (Tatum), Alyssa Rowland, Natasha Rowland, and Luke Rowland; great-grandkids Alex Hamilton, Maddie Hamilton, Griffin Hamilton, Elizabeth Jenck, Jaxson Jenck, Rylee Rowland, Tatum Landolt, Ryland Landolt; brother and sisters Norman Stice (Betty), Jerry Stice, Norman Wright (Garnet), Carol Hughes (Robert), Phillip Stice (Pat), and Gail Carpenter (Jim), and Ken Stice (Shirley).

Dorothy Jean Rowland passed away on January 23rd with her children present. She was 84 years old. Her battle was over. She went to be with her Lord. She was born in Bennett, Colorado on May 4th, 1935 to Chester and Lois Stice. She graduated... View Obituary & Service Information

The family of Dorothy Jean Rowland created this Life Tributes page to make it easy to share your memories.

Dorothy Jean Rowland passed away on January 23rd with her children...

Send flowers to the Rowland family.