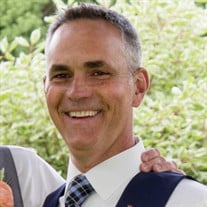 Matthew 6:33 &#8220; But seek first His Kingdom and His Righteousness, and all these things will be given to you as well. &#8220; These words by Jesus Christ were lived out faithfully by our friend Doug Hepler. Douglas Dwayne Hepler was born... View Obituary & Service Information

The family of Douglas Dwayne Hepler created this Life Tributes page to make it easy to share your memories.

Matthew 6:33
“ But seek first His Kingdom and His Righteousness,...

Send flowers to the Hepler family.