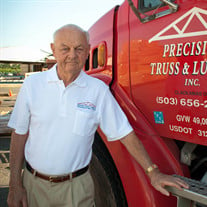 DuWayne L. Knutson passed away at his home in West Linn July 13, 2017. He was 89 years old. He was born Sept. 18, 1927 in Parshall, N.D. to Clarence and Marion Knutson. At age 12 his family moved to Oregon. As a youth DuWayne enjoyed an active church life and worked hard to help his family make ends meet during difficult times. This instilled a work ethic that lasted a lifetime and brought much satisfaction and success in his family life and career. After a brief time in the U.S. Navy DuWayne attended LIFE Bible College, Covina Baptist Seminary and Western Baptist Seminary. In the early years of his career he worked as a carpenter, later managing roof truss plants in the Portland area and eventually starting his own business in 1971, Precision Roof Trusses, Inc., which later became Precision Truss and Lumber. DuWayne married the love of his life, Annelia "Neli" Berreth March 4, 1955 with whom he spent 62 wonderful years. Together they raised their three children, Dyann, Denise and Greg in Oregon City. DuWayne built their first home himself on Telford Road after work and on weekends. A few years later the family moved to their home on Charman Street, which he also built himself. After the children were grown DuWayne and Neli built their dream home on a hill in West Linn overlooking his beloved Pacific Northwest with the view of Mt. Hood he had always dreamed about. Eventually, in retirement, DuWayne and Neli wintered in Palm Desert and traveled the world. Throughout his life DuWayne was an avid hunter, golfer and fisherman, the ultimate outdoorsman. He packed on horses and mules throughout the mountains of the Pacific Northwest. Most importantly DuWayne was a devoted husband and father. He always had time for his family, which in addition to his three children grew to include six grandchildren and nine great-grandchildren who know him as their "Poppy". He will always be remembered with love for his great generosity and caring heart. DuWayne was preceded in death by his parents, Clarence and Marion Knutson; and sister, Delores Skreen. He is survived by his wife, Annelia Knutson of West Linn; daughters, Dyann Myers (Bruce) of Wilsonville and Denise Zogby (Drew) of Blaine, Wash.; son, Gregory Knutson of West Linn; grandchildren, Dawnelle Breum, David Droz (Kendra), Catherine Zogby (Cameron), Andrew Zogby Jr. (Brittany), Jack Knutson and Ivy Myers; and nine great-grandchildren. He is also survived by four of his siblings, Gordon Knutson, Joann Knutson, Elroy Knutson (Beverly) and Yvonne Hines (Darrell). A memorial service will be held at 10:30 a.m., Wednesday, July 19, 2017, at the Abernathy Center Chapel in Oregon City. A luncheon will follow.

DuWayne L. Knutson passed away at his home in West Linn July 13, 2017. He was 89 years old. He was born Sept. 18, 1927 in Parshall, N.D. to Clarence and Marion Knutson. At age 12 his family moved to Oregon. As a youth DuWayne enjoyed an active... View Obituary & Service Information

The family of DuWayne LuVerne Knutson created this Life Tributes page to make it easy to share your memories.

DuWayne L. Knutson passed away at his home in West Linn July...

Send flowers to the Knutson family.