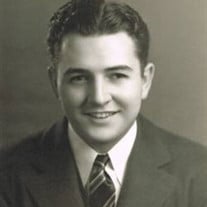 Dwight Catherwood was born on June 16th, 1918 in Mill City, Oregon. He was the youngest of 5 sons of Arthur and Rachel Catherwood. He attended elementary and high school in Mill City. He was very active in sports and his high school basketball team competed in the state basketball championships his junior and senior years. Dwight attended Willamette University in Salem, Oregon where he continued to excel in sports. He is a member of the Willamette University Athletic Hall of Fame. After graduation in 1940, He began his teaching career in Phoenix, Oregon. He was offered a minor league baseball contract with the Cleveland Indians, but chose to start his coaching and teaching career instead. Dwight married his high school sweetheart, Velma Marie Downing, on August 1st. 1941. They were married almost 60 years before Velma passed away on August 11th. 2001. In the spring of 1942, Dwight joined the Navy, attending Officers Training School at the University of Arizona and meteorology training at UCLA. He spent most of his Navy career performing air/sea search and rescue and antisubmarine patrols in the South Atlantic with a lighter-than-air navy squadron. He returned to teaching after the war, joining the staff at West Linn High School where he coached varsity basketball and assisted with football and baseball. While at West Linn High School, he helped form the Clackamas County Junior Baseball Association, and he served as its president for 20 years. In 1954 Dwight started a new career as an independent insurance agent. He joined the Legler, McGauhey and Hahn Insurance Agency in Oregon City. This agency grew through mergers to become the Thomas-Hahn Agency, then Oregon Pioneer Insurance and now the Fournier Group. Dwight spent over 55 years in the insurance business and was a respected member of the local business community. Dwight was active in community affairs. He was a member of the board of directors of Willamette Falls Community Hospital for 10 years and Chairman of the Board for one year. He was also a charter and life member of the West Linn Lions Club and a life member of the Elks Lodge and Masonic Lodge. Dwight is survived by his son, Dwight W and daughter-in-law Rachel, and two grandchildren: Michael Catherwood and Tracy Edmonds. He has four great grand children: Tommy, Raquel, Samantha and Mark. PDF Printable Version

Dwight Catherwood was born on June 16th, 1918 in Mill City, Oregon. He was the youngest of 5 sons of Arthur and Rachel Catherwood. He attended elementary and high school in Mill City. He was very active in sports and his high school basketball... View Obituary & Service Information

The family of Dwight Catherwood created this Life Tributes page to make it easy to share your memories.

Send flowers to the Catherwood family.