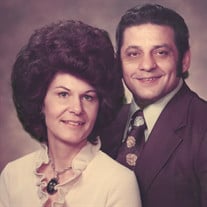 At their home, in the early hours of March 29, 2019, Edward Allick under the care of Hospice passed peacefully. Within two hours, Mickey (Edith Anderson Allick) unexpectedly passed to join Ed and continued their love story together. She passed in the comfort of a family friend’s arms and Nick by her side. This love story began August 6, 1955, when Ed and Mickey were married and honeymooned in Skamania, Washington. Their amazing 64 years of marriage were in Oregon City where they began their family with their son, Nick Allick. They raised Nick surrounded by loving family and lifelong friends. Edward Allick was born in Belcourt, North Dakota, on March 5, 1934, to Eva and Ashmael Allick. He moved to Carmel, California in grade school and then to Oregon City for junior high and graduated from Oregon City High School in 1955. He joined the army soon after graduation and served our county through 1961. While working at Crown Zellerbach full time, he attended Portland State College. In 1962 he received a Bachelor of Science in Education. He started his teaching career in Mulino, Oregon and then taught at Gardiner Junior High for seven years. Edith Anderson affectionately called Mickey was born on July 11, 1934, in Colfax, Washington to Allen and Ruth Anderson. She grew up and attended school in Colfax, Washington. She moved to Oregon City in 1954 where she met and married Ed. She began her career in business working as a carhop at Roakes (Foot Long Hotdog Stand). Her hard work and connections led to the business opportunity to purchase The Sausage Kitchen. Ed joined Mickey at The Sausage Kitchen in 1970 and as it developed into a well-known business establishment for sportsmen in the community. Ed continued to serve Oregon City as an advocate for numerous community causes, a school board member, City Commissioner, and Mayor of Oregon City. Edward was preceded in death by his parents and three brothers, Donald, Roy, and Raymond Allick. Mickey was preceded in death by her parents, a sister, Ada Anderson Scott, and brother, Allan Anderson. In addition to their son, Nick Allick, they are survived by Mickey’s Brother John Anderson, nieces, nephews, and many lifelong friends. In lieu of flowers to honor Ed and Mickey donations may be made to Oregon City Meals on Wheels in care of Pioneer Community Center, 503.657.8287

At their home, in the early hours of March 29, 2019, Edward Allick under the care of Hospice passed peacefully. Within two hours, Mickey (Edith Anderson Allick) unexpectedly passed to join Ed and continued their love story together. She passed... View Obituary & Service Information

The family of Edith "Mickey" Allick created this Life Tributes page to make it easy to share your memories.

Send flowers to the Allick family.