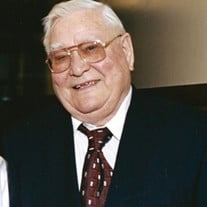 View the image gallery Edward Floyd Enloe, passed away peacefully in his sleep at home in Boring, Oregon on Sunday, January 25, 2009. He was born October 22, 1927 in Molden Missouri to Marion R. and Margaret Enloe. On June 23, 1945, he married Juanita Mae Critz in Vancouver, WA. They had one son and one daughter. He was a member of the Ironworkers Local # 29 out of Ptld, OR, and worked on construction sites throughout the northwest in Oregon, Washington and Idaho many many friend. Dad loved to fish, hunt and camp, and enjoyed many trips to the Oregon Coast with Creasie, friends Bob and Margaret and family. Dad loved to listen to country western music and along with his friend, Oatis Porter and others, enjoyed playing the guitar, singing and writing songs. Several of their songs were copyrighted. He is preceded in death by his parents, Marion R. and Margaret Enloe, his wife, Juanita Mae Enloe, who passed away in 1990, brothers Theoadore Enloe and Harlan (Icenogle) Enloe. He is survived by his son Edward Floyd Enloe, Jr (Susan) of Kennewick, WA, daughter, Linda Mae Enloe of St. George, Utah, three granddaughters, Melissa (Matt) Koontz of Vancouver, WA, Teresa (Mark) Zimbehl of Pasco, WA, and Carie Enloe (Josh Suazo) of Spokane, WA, Creasie Kinney, Boring, OR, his companion of the past 18 years, and many nieces, nephews and friends. PDF Printable Version

View the image gallery Edward Floyd Enloe, passed away peacefully in his sleep at home in Boring, Oregon on Sunday, January 25, 2009. He was born October 22, 1927... View Obituary & Service Information

The family of Edward Floyd Enloe Sr. created this Life Tributes page to make it easy to share your memories.

Send flowers to the Enloe family.