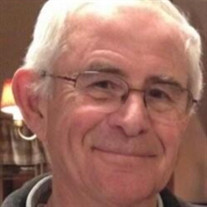 Dr. Edward Joseph Serres, a devoted family man and surgeon, passed away on June 21, 2021, in Portland, Oregon. He was 80 years old. Ed was born on August 5, 1940, in Oregon City, Oregon. He was the eldest son of the late Joseph and Mary Serres. Ed was preceded in death by his brother, Joseph (Diane Wilson) Serres, Jr., and is survived by his brothers William (Nancy) Serres and Daniel (Patti) Serres. Ed attended St. John the Apostle Catholic School in Oregon City, and Oregon City High School. He was a member of the Boy Scouts of America and earned the Eagle Scout rank. Ed attended University of Oregon, where he was a member of Theta Chi Fraternity, and from which he received a Bachelor of Science degree in 1962. In 1966, Ed graduated from Creighton University School of Medicine. It was at Creighton that Ed met his wife of 55 years, Linda DePasquale, on a blind date that resulted in a deep love and joy together. Ed and Linda married in Omaha in 1966, the day before they both graduated from Creighton. They traveled to Los Angeles, where Ed completed a medical internship at Los Angeles County Hospital, and a medical residency at Orange County Medical Center, where he was chief surgical resident. Ed served in the United States Army for three years, including in Frankfurt, Germany and Fort Huachuca, Arizona. Ed moved back to Oregon and joined Clackamas Surgical Associates, where he practiced general and vascular surgery on the staff at Willamette Falls Hospital in Oregon City and Meridian Park Medical Center in Tualatin. Ed served as chief of staff for a year at Willamette Falls Hospital. Ed retired in 2000, after which he had time to fish, go on adventures in his camper, and continue to raise sheep, beef, and bountiful produce in his garden, orchard, and vineyard. Ed also continued his love of medicine by serving with Clackamas Volunteers in Medicine. Ed loved spending time with his family at the Mt. Hood cabin, little beach house in Tierra del Mar, and Astoria, where he delighted in watching the ships. Ed is survived by his wife of 55 years, Linda Serres, and his eight children: Anthony Serres, Sarah (Rick) Serres, Christopher (Karolina) Serres, Joseph (Amy) Serres, Nicholas (Michelina) Serres, Daniel (Laura) Serres, Anne-Marie (Austin) Serres, and Matthew (Daniel) Serres. Ed was proud of his children’s work in the areas of social and environmental justice, public service, and education. Ed is blessed to also be survived by his twelve grandchildren: Makenzie Smith, Uma Serres, Bela Serres, Dominic Serres, Manuela Serres, Wyatt Gove, Salvador Wienecke, Liam Gove, Benjamin Wienecke, Cecilia Wienecke, Edward Serres, and Vivienne Serres. A funeral Mass will be celebrated on Thursday, August 5, 2021 at 11:00 a.m. at St. John the Apostle Catholic Church, 417 Washington Street, Oregon City. Following the Mass, there will be a gathering at Abernethy Center, 606 15th Street, Oregon City. A private internment will take place the following day at 1:00 p.m. at St. John the Apostle Cemetery. In lieu of flowers, the family asks that donations be sent to Creighton University School of Medicine online at https://medschool.creighton.edu/ or by mail to Creighton University, Attn: School of Medicine, PO Box 30282, Omaha NE 68103-1382.

Dr. Edward Joseph Serres, a devoted family man and surgeon, passed away on June 21, 2021, in Portland, Oregon. He was 80 years old. Ed was born on August 5, 1940, in Oregon City, Oregon. He was the eldest son of the late Joseph and Mary Serres.... View Obituary & Service Information

The family of Edward Joseph Serres created this Life Tributes page to make it easy to share your memories.

Send flowers to the Serres family.