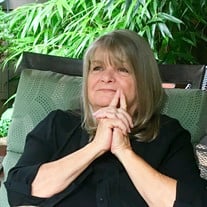 Eleanor Rose Alexander Nunn 1/13/1941 9/18/2018 Eleanor Rose passed away suddenly of a heart attack on Tuesday, September 18th after a short stay in the hospital. She was born at the beginning of World War II and like her parting from... View Obituary & Service Information

The family of Eleanor Rose Nunn created this Life Tributes page to make it easy to share your memories.

Send flowers to the Nunn family.