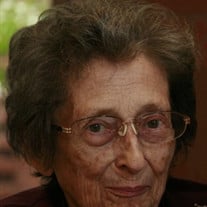 Elizabeth Charlotte Hilmes Seifert Werner, beloved mother, sister and friend, died June 13, 2009 in Oregon City, Oregon. Born in Sheboygan, Wisconsin on March 3, 1924, to Julius and Charlotte (Stoesser) Hilmes, Elizabeth grew up there with three older siblings. After graduating from nursing school as a RN at St. Mary’s Hospital in Wausau, Wisconsin, she moved to Oregon to use her nursing skills at the Tillamook Hospital until 1950 when she married Herman G. Seifert, Jr., formerly from Sheboygan, and started a family. After Herman passed away in 1963, she started working for the Oregon City School District as an outdoor school nurse, she was known as Cottontail, until she retired. In 1971, she married Otto Werner Jr. They moved to the Oregon Coast upon his retirement. In 2005, they returned to Oregon City due to health reasons. Otto Werner preceded Elizabeth in death in 2007. Elizabeth was one of the sweetest and most generous hostess, as she would invite many people to her home for meals and entertainment. She loved to have people around and loved to cook her special German potato salad dish with brats. Games would include Bridge, Pinochle, 10 Little Indians or what ever cards would match the age bracket of her guests including all her grandchildren. She was always available for hugs and smiles. Her faith in God was always present with her many Bible Studies and in her way of life. She is survived by her sister Carita Nelson of Sturgeon Bay, WI; along with her children, Debora Franzen of Oregon City; Ronald (Terri) Seifert of Newport; Jack Seifert and Philip (Beverly) Seifert of Oregon City; Scott (Susie) Werner of Oregon City and Nancy Oswald of Gladstone. She will be missed by her children, grandchildren, great-grandchildren, great-great grandchildren, nieces and nephews. In lieu of flowers, donations in Elizabeth’s name may be made to one of the following organizations: Pulmonary Fibrosis 1332 N. Halsted St. Ste. 201 Chicago, IL 60642-2642 American Heart Association 710 2nd Ave. Ste. 900 Seattle, WA 98104 American Diabetes Foundation 1701 N. Beauregard St. Alexandria, VA 22311 Willamette Falls Hospice 1505 Division St. Oregon City, OR 97045 There will be a memorial held on June 26 at 4:00 p.m. at the First Presbyterian Church of Oregon City. PDF Printable Version

The family of Elizabeth Charlotte Seifert created this Life Tributes page to make it easy to share your memories.

Send flowers to the Seifert family.