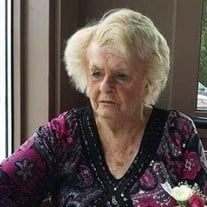 Evelyn Lucille Travis was born on May 25, 1921, in San Jose, California, to Ottily and Harry Travis. She was the oldest of 4. Siblings included Laura, Harry and Ethel. Times were tough after her father abandoned his family. Her mother worked hard to support her family, and extended family. Evelyn helped by working in the cannery. Quite by accident, through mutual friends, she met Jack Bilognia. They married in 1942, right before Jack shipped out to Samoa. During the war, she worked for Sears in the auto department. She was very proud of her accomplishment there. Their daughter Donna was born in 1947 and that was the end of her career with Sears. Over the years Jack and /Evelyn worked hard in acquiring property and building and managing apartments. Evelyn took classes in sewing, photography and art. She made most of the clothes for her and her daughter. Somewhere along the way she developed a love for plants and flowers. She was a bit obsessive and often spent thousands of dollars at the nursery. She once said she wanted her garden to look like Butchart Gardens. Evelyn was always willing to help someone in need. Over the years she opened her home to several nieces and nephews, as well as her mother. After her husband died, she shared her home with her granddaughter Sheri and great-grandsons Jackson and Brandon Rose. Those were special times for her. In 2005 Jack and Evelyn moved to Oregon City to be near their family. She was preceded in death by her husband, parents and siblings. She is survived by daughter Donna (Don) Slack, Grandson Brian Slack, Granddaughter Sheri (Jeremy) Imes, Great-grandsons, Daniel Slack, USMC, Caleb Slack, USMC, Jackson Rose and Brandon Rose, and many nieces and nephews. She loved her family and looked forward to Friday night family dinners, and family parties at her home. She was loved by many. Many people have commented about her spunk. She will be missed.

Evelyn Lucille Travis was born on May 25, 1921, in San Jose, California, to Ottily and Harry Travis. She was the oldest of 4. Siblings included Laura, Harry and Ethel. Times were tough after her father abandoned his family. Her mother worked... View Obituary & Service Information

The family of Evelyn L. Bilognia created this Life Tributes page to make it easy to share your memories.

Send flowers to the Bilognia family.