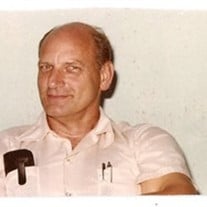 Floyd George Holschu was born on Sunday, October 23, 1927 at home in Clackamas Heights, now known as Park Place, which is now located within the city limits of Oregon City. His father was George Andrew Holschu and mother was Helena Augusta... View Obituary & Service Information

The family of Floyd G. Holschu created this Life Tributes page to make it easy to share your memories.

Send flowers to the Holschu family.