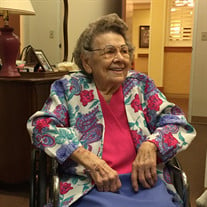 Frances (Schommer) Brownlow Baisch Born 04/21/1925 in Chadron, Nebraska, Frances Jane was the 10th of 11 children born to Joseph and Cecilia Schommer. She was the final survivor of that family. With seven brothers and three sisters, she lived on a large cattle ranch in Beaver Valley east of Chadron, NE. Because her father did not value it, her formal education was terminated with grade 8 though she excelled in math, spelling and penmanship. She married “Bud” Brownlow at a young age and took care of their daughter, Carol, while he served in WWII. At the end of the war, they moved to Chadron and had their second daughter, Rene. Frances was involved in all the extended family happenings and worked part time at the drug store. Eight years later, the Brownlow family added a set of twins, Leonard and Leona and shortly thereafter the family moved to Portland, Oregon. In 1975, Fran married John Baisch and spent the next 25 years building a new home in West Linn, relaxing at the beach and on the golf course, and traveling extensively. This union brought John Jr. (deceased), Jay and Joni (all young adults) into her family. As a housewife and homemaker, she enjoyed celebrating all the birthdays and holidays with her children, step children and grandchildren. After John’s death in 1998, she moved to Homewoods on the Willamette and eventually to McLaughlin Place in Oregon City. Fran was an avid reader, politically astute, and socially active. She particularly enjoyed fishing, camping, dancing, pinochle, and bingo. She loved to bake and make salads. She was blessed with a good sense of humor and endured many physical challenges with grit and determination. The single word that best defines her was “independent.” She was a soft soul with a crusty exterior and will be missed by her family and many nieces and nephews.

Frances (Schommer) Brownlow Baisch Born 04/21/1925 in Chadron, Nebraska, Frances Jane was the 10th of 11 children born to Joseph and Cecilia Schommer. She was the final survivor of that family. With seven brothers and three sisters, she lived... View Obituary & Service Information

The family of Frances "Fran" J Baisch created this Life Tributes page to make it easy to share your memories.

Send flowers to the Baisch family.