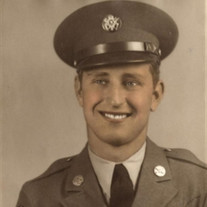 “Where have all our heroes gone?” Many of us are shocked to find out that most of our heroes are just average men living among us. Men called to duty under circumstances they neither control nor have a cause to fight for themselves and yet they go and instead, they fight for us, our way of life and for the spirit of freedom throughout the world. On Christmas, we lost a hero. Francis Darrel Winn, born on May 27th, 1919 and raised in Albany, Oregon, died at the age of 90. From his home on Christmas Day, the 25th of December, 2009, he slipped calmly and quietly into a deep slumber from which he did not wake. He was the last surviving child of William and Luella Winn, (he had three brothers, Arthur, Lewis and Walter) and after 67 years of marriage, leaves behind his loving wife, Alice. He was a father to two daughters (Darrelene and Dianna), a grandfather to four children (Holly, Jayson, Alicia and Tristan) and a great-grandfather of five (Adam, Nicholas, Kennedy, Carson and Emerson). Sergeant Francis Darrel Winn, United States Army, answered the call to his country and served during World War II. He was one of many brave men (some 32,250 in all) that stormed Omaha Beach at Normandy. Some 425,000 Allied and German troops lost their lives during the siege. He spent the next year engaged in battle across Western Europe to free a people he had never met from Nazi aggression and oppression. He survived the Battle of the Bulge and saw all of France, most of Belgium and parts of southern Netherlands liberated by allied efforts. His service drew to a close in the European Theater with distinction, halting in the allied advance on Germany just kilometers outside of Berlin. Sgt. Darrel Winn returned home with honor, having been awarded two purple hearts for wounds sustained in combat. Upon returning home to Albany, Oregon, he went to work for Pacific Power and Light and retired after some 40 years of service to the company and his community. My grandfather was a unique man. He was opinionated and very strong willed, loving and kind, funny and cantankerous. When people first met him, I do not think they ever recognized or saw him as extraordinary and that suited him just fine. In fact, I am not sure that he considered himself anything other than a neighbor, friend or citizen at heart. Today I want everyone to know we lost a very special man. He was a true American hero. This Christmas, I lost the only man I would have ever followed without question. As a Lieutenant Colonel in the United States Air Force Special Forces, I now understand how his country, his community and his family remained the centerpiece of his heart. Some say, "Heroes are born, and not made." I just know that I feel a tremendous sense of loss in his passing. There is a huge gaping hole in my heart that I hope time may fill. How funny it is to now know how very lucky I was to have had my hero be such a constant part of my life for so many years. Please join me in mourning the loss of a brother, a husband, a father, an uncle, a grandfather, a great-grandfather and a true American Hero. Always remember and never forget the common man who is able to accomplish truly uncommon things. May his actions, knowledge and life's example never die but live on in our memory and our nation's history forever. Francis Darrel Winn will be laid to rest with full military honors on Monday, the 4th of January 2010 at Willamette National Cemetery. PDF Printable Version

&#8220;Where have all our heroes gone?&#8221; Many of us are shocked to find out that most of our heroes are just average men living among us. Men called to duty under circumstances they neither control nor have a cause to fight for themselves... View Obituary & Service Information

The family of Francis Darrel Winn created this Life Tributes page to make it easy to share your memories.

“Where have all our heroes gone?” Many of us are shocked to find...

Send flowers to the Winn family.