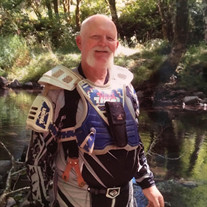 Fred was born in Tillamook, Oregon, to father, Fred Johnson and mother, Ann Doerr (Dungey) in 1948. Fred graduated from Oregon City High School in 1968. He received his AA in Wastewater Management from Clackamas Community College, working first at Estacada Wastewater Plant and then at the Salem Plant. Later he attended the Oregon–Washington Carpenter’s Apprentice Program, working for many years out of Local 1388 in Oregon City. He took great pride and accomplishment in building his own home in Mulino, from foundation to roof and everything in between. Motorcycle riding was his passion in life, racing motocross at Delta Park, even getting his daughter to race. One of his favorite places to camp and ride was on the trails at the Trask River camping area, outside of Tillamook, Oregon. McCubbins Gulch in the Mt Hood National Forest was another of his favorite areas to ride. He and his wife took many road trips around the Pacific Northwest on their Harley. Early on in life, if not riding one of his motorcycles, he could be found on the baseball field coaching little league baseball. Throughout his life he often shared fond memories of his time coaching. In the later part of his life, he took up golf. He was a member of Oregon City Golf Course. He gave the game a good try with same of his shot going in the right direction. You could always find him on the course Monday - Friday enjoying the great outdoors. In fact, if not at the golf course he was found on his property tending to his putting green, or “putting brown” as he jokingly referred to it as. He is survived by his wife, Patty (Bolkan) Johnson, daughter, Rebecca (Becky Johnson) Timms (David Mackenzie) and the light of his eye, granddaughter, Helen Mackenzie In leu of flowers, a memorial fund has been established at US Bank under Fred Johnson, with the donations going to Clackamas County Little League. Celebration of Life will be held at the home he built in Mulino on September 15, 2018 at 3:00, all are welcome.

The family of Gail Fred Johnson created this Life Tributes page to make it easy to share your memories.

Fred was born in Tillamook, Oregon, to father, Fred Johnson and...

Send flowers to the Johnson family.