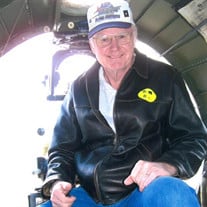 Gary Norton was born in Lebanon, Oregon on March 31, 1939, and grew up in Halsey, Oregon. While attending Halsey High School he met a stunning young lady, new to town, with great legs...Gloria Lister. Gary and Gloria courted and then married on July 9, 1960, and continued their love affair for 56 years. Gary proudly served his country in the United States Army, in active duty in Korea from 1962-1964, honorably discharged in 1968. He graduated from Oregon State University in 1968, with a degree in accounting, and spent most of his career as a CPA/comptroller in the industry he loved: timber. Gary’s spare time was spent tinkering around his shop either woodworking, building model airplanes, boats, or cars, and general handyman work. He enjoyed photography, and stamp and coin collecting. He played guitar, and even dabbled in homemade wine making (with mixed results). He and Gloria were avid gardeners, creating vegetable and flower gardens envious to all. Hunting, fishing, and camping were all passions of his; he was most at home when surrounded by nature with family and friends. Upon retiring, he decided to conquer a life-long fear of flying, and became a pilot. Model airplanes ~ building them, studying them, flying them, and often crashing them, was a keen pursuit of Gary’s. But when he actually took to the skies himself his hobby turned into a love affair. Becoming a pilot was one of his proudest accomplishments. Even when he was sick, he told numerous doctors and nurses about his triumph! Gary passed away on July 24th, at home in Oregon City. Private cremation rites were held, and he will be laid to rest at Mt. View Cemetery in Oregon City. He is survived by his wife Gloria; his daughters, Susan Norton and Lexie Fields; his two grandson’s, Jordan and Dylan Fields, and his sister Joanne Frieze. Gary was a son, brother, husband, father, grandfather, uncle, athlete, soldier, scout leader, coach, mentor, accountant, gardener, builder, mechanic, pilot and friend.

Gary Norton was born in Lebanon, Oregon on March 31, 1939, and grew up in Halsey, Oregon. While attending Halsey High School he met a stunning young lady, new to town, with great legs...Gloria Lister. Gary and Gloria courted and then married... View Obituary & Service Information

The family of Gary Russell Norton created this Life Tributes page to make it easy to share your memories.

Send flowers to the Norton family.