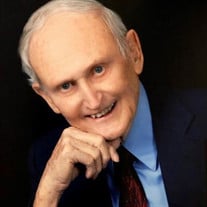 Gene L. Garoutte, of Oregon City, Oregon, passed away in his home on the morning of February 23, 2019, at the age of 94. Gene was born in Tennant, California, February 12, 1925, to Ralph O. Garoutte and Katherine (Schwind) Garoutte. In 1936, the family moved to Eugene, Oregon. After graduating from Eugene High School in 1942, he attended the University of Oregon for one year. In 1943, he enlisted in the army and served in World War II in the Philippines and other islands in the South Pacific, until he was honorably discharged in 1946. Gene then enrolled in the Oregon State College (Oregon State University) Mechanical Engineering School and graduated in1949. He earned his Professional Engineering license shortly thereafter. Gene worked at the Oregon Insurance Rating Bureau from 1949 to 1952. He then was employed at Marsh & McLennan from 1952-1958. In 1958, he partnered with his high school/college friend, Al Crombie, at Crombie Service Company, which later was named Northwest Engineering Service, Inc., located in Tigard, Oregon. As a start-up company, Gene and Al were fortunate to be the first independent firm to offer Testing, Adjusting and Balancing (TAB) services in the Northwest, laying the groundwork for the success of the company today. Gene retired in 1991. He is a lifetime member of ASHRAE (American Society of Heating, Refrigerating and Air-Conditioning Engineers). While at Oregon State, Gene met his wife, Norene J. Nott. They were married on July 23, 1950 in Corvallis, Oregon. They raised three daughters in their Oregon City, Oregon home that Gene designed and built. Golfing, fishing, camping, reading and woodworking were his interests. On any given day, one could find Gene helping out a friend or neighbor with home improvement projects. Gene and Norene enjoyed traveling with family and friends. He was an active member at Oregon City Evangelical Church, serving on various boards, helping in remodeling the church and participating in Bible studies. Gene also took several short-term missionary trips to South American countries to help with various construction projects. Gene is survived by his wife, Norene J. Garoutte, of Oregon City, three daughters, Gayle McDowell of Oregon City, Janie Henderson (Dennis) of Lake Oswego and Linda Buck (Ronald) of Oregon City, four grandchildren, Megan Melrose (Todd), Brent Robinson, Tess Robinson, and Jonah Buck. He is also survived by two great-grandchildren, Samuel Melrose and Maddie Melrose, one sister, Karen Snider, three nieces, Sara Knowlen, Memory Perry and Julie Jacobus and two nephews, Cameron Perry and Steve Snider. Gene’s sister, Carmen Perry, preceded him in death on February 12, 2015. Donations in Gene’s honor may be made to Oregon City Evangelical Church, PO Box 10, Oregon City, OR 97045 Following the memorial service, there will be a lunch-in at the church.

The family of Gene L. Garoutte created this Life Tributes page to make it easy to share your memories.

Gene L. Garoutte, of Oregon City, Oregon, passed away in his...

Send flowers to the Garoutte family.