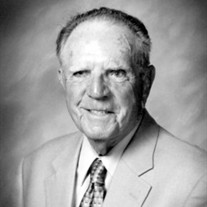 George Henry Warmuth February 8, 1923 – June 15, 2010 George was born in Portland. He served in the US Navy during World War II on the USS Portland and was awarded the Silver Star in 1942 for his brave actions in the Solomon Islands. Following the war, George worked for many years at Christenson Electric and Georgia Pacific where he retired as Senior Electrical Systems Engineer in 1985. After retirement, he moved to Redmond, Oregon, and in 2005 to Oregon City. During his years in Redmond, George was active in the pro-life movement, Knights of Columbus and spent many happy hours golfing with friends at Crooked River Ranch. He loved elk hunting, camping and family getaways to South Twin Lake and the Library Beach Cabin in Manzanita. George and Eunice celebrated their 67th wedding anniversary in May. Their marriage was a living testament to their love and commitment to each other, their family, their community and their faith. George passed away peacefully with his family at his side. Along with his wife, Euny, George is survived by his daughters, Cheryl Dodge (Larry) and Nancie Wolfer (Merle), grandchildren Anne Dodge-Schwanz, Brad Dodge, Alex Dodge and Dan Paulosky and seven grandchildren. He was preceded in death by his father Leo, mother Hilda ‘Queen’, brother Leo, daughter Kathleen Ann and son Gregory Leo. George was an exemplary role model to this family and to all who knew him. He was a man of honor, courage and commitment. He showed his family how to live, and in the end, how to die with honor and grace. A Funeral Mass will be held Tuesday, June 22, 11:00 a.m. at St. John the Apostle Church in Oregon City, followed by burial service at Willamette National. Arrangements by Hillside Chapel. PDF Printable Version

George Henry Warmuth February 8, 1923 &#8211; June 15, 2010 George was born in Portland. He served in the US Navy during World War II on the USS Portland and was awarded the Silver Star in 1942 for his brave actions in the Solomon Islands.... View Obituary & Service Information

The family of George Henry Warmuth created this Life Tributes page to make it easy to share your memories.

Send flowers to the Warmuth family.