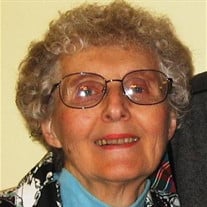 Grace Kibler DeLap Grace Ann Dove Kibler DeLap was born on September 28, 1928 in Portland, Oregon to Florian (Linklater) and Hal Kibler. She grew up in the Eastmoreland neighborhood, the second of three sisters, attended Washington High School, and went on to earn a degree in Journalism from the University of Redlands. After college Grace traveled throughout Europe, and lived and worked at the American Baptist conference grounds in Green Lake, Wisconsin as well as the Baptist offices in New York City. In 1955 she married Vernon DeLap at Portland’s First Baptist Church, the same place she and Vern “met” in the nursery when they both were infants. Their families were friends and they knew each other growing up, but didn’t date until after college, discovering that they both enjoyed New Yorker cartoons. Grace was a homemaker, and she and Vern had four children, raising them in Milwaukie and instilling in them faith and love for Jesus, setting an example of church involvement and serving others. She was active for almost 60 years in the First Baptist Church of Oregon City, editing the “Friendly Visitor” weekly newsletter for several decades, volunteering with HOPE (an Oregon City food bank), and serving in many other areas. Among her many interests she loved reading, birdwatching, riding trains, and listening to activity on emergency scanners. She and Vern loved enjoying the view from their home in Oregon City. Her favorite verse was Proverbs 16:9, “In their hearts humans plan their course, but the Lord establishes their steps.” Grace passed away on February 20 in Milwaukie after a short illness. She is survived by her husband of 61 years, Vern DeLap, three children and eight grandchildren: Meg (Dave) Rice of Hillsboro, Dave (Karla) DeLap of Milwaukie, and John of Fountain Valley, CA. Their grandchildren are Aimee, Peter (Paige), Maria, Cristina, Regina and Daniel DeLap, and Stephen and Thomas Rice. She was preceded in death by son Paul DeLap in 1996, and sisters Ruth Ross in 2002 and Flora Hill in 2009. A memorial service will be held Saturday, March 11 at 2:00 pm, at the First Baptist Church in Oregon City, 819 John Adams. In lieu of flowers donations may be sent to the church, or Camp Arrah Wanna (http://www.camparrahwanna.org/)

The family of Grace Kibler DeLap created this Life Tributes page to make it easy to share your memories.

Send flowers to the DeLap family.