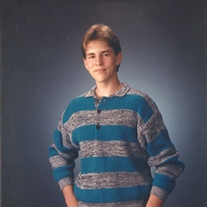 Guy was born at Willamette Falls Hospital on May 30th, 1971. His life came full circle and he passed away at Willamette Falls Hospital on April 7th, 2010. During those 38 years he was plagued with health issues that would have worn down normal men but Guy faced each in stride and had one of the brightest personalities anyone could hope to have. Follow along for a short history of his life. Guy graduated from Oregon City High School in 1989 after a normal childhood. He was able to play football and golf while in school and was also a very good student. As an adult he became a Teamster and worked at the United Grocers Warehouse until medical hurdles forced him to step away from that occupation. He was briefly married but left in the care of better hands from his immediate family in 2002. He lived the rest of his life surrounded by loved ones closest to him and was a shining star of happiness for others to rely on. His passing was very sudden and unexpected but he was with the ones he loved when his time came. We all miss him greatly. During the active portion of his life Guy was able to tag along with his brother on adventures and team sports that made many memories for them. He helped form a sponsored Paintball tournament team and played on that team for several years. After that the two switched to roller hockey and created a tournament team that took them to the US Finals Tournament in Orlando, FL. He had a slapshot that scared most goaltenders and turned out to be an imposing defenseman. They loved hockey so much that the two of them took a 16 hour, straight through drive to Calgary in Alberta, Canada to watch the Red Wings play. Guy enjoyed trucks, loud stereos, Mustangs, and video games. Guy's passing has left an empty space in many of our lives that we can only hope to fill with happy memories of him. Even though he was given a difficult road through life he managed to navigate that path like a champion. His ability to absorb adversity and maintain the most positive attitude should encourage all of us to do the same. He will remain in our thoughts and smiles. His memory will help to give us strength when our own struggles push back against us. Guy, we will always love you and we will miss the spot of sunshine that you brought to our world. PDF Printable Version

The family of Guy Ryan Livingston created this Life Tributes page to make it easy to share your memories.

Send flowers to the Livingston family.