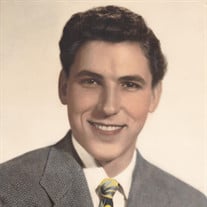 Harmon Lee Day was born January 9, 1929, in Portland, Oregon to Everett and Mabel Day. Dad was raised in Portland, Oregon, with his four siblings: Jack, Benson, Patricia, and Stephen. He graduated from Benson Polytechnic High School. Dad met the love of his life, Donna Jean Evans, while working at a friend's gas station on Division Street in Portland. They were married on November 24, 1950, and remained married for 56 years, until mom passed away in 2006. They had five children: David Lee, born in 1953; Jeanne Lucille, born in 1956; Tracey Ann, born in 1957; Melinda Sue, born in 1963, and Jennifer Ruth, born in 1967. Dad was a member of Gresham First Baptist Church and involved in the church choir for many years. He loved to sing and he could play the piano by ear. When the family outgrew their little house in Portland, dad took a chance and moved out to the country. He purchased another two-bedroom home and 4 ½ acres in Happy Valley for $12,000 in 1961. In the late 60's, he purchased another 2 acres and Harmon built the family home on this property. Together, our parents occasionally raised beef, had a milk cow or two, a couple of pigs, a few horses, as well as managed four rows of raspberries, a large garden, a filbert orchard, and for a short time a Christmas tree farm. Dad worked as a machinist for Iron Fireman, Electronic Specialties, and finally Omark Industries where he worked for over 25 years until his retirement. He worked hard and long hours, often working overtime in order to support his family of seven, while mom took great care of the household. They were a team that way. In retirement, dad was able to enjoy countless hours on the ball fields and in the school gym, watching his grandchildren play sports and music. Dad had a passion for cars -- all kinds of cars! He had a running count of just how many cars he had purchased in his 88 years. His passion extended to fixing cars as well; he was the family mechanic. Dad loved the Oregon Coast. He loved it so much that in 1979 mom and dad (along with their dear friends, Vern and Mildred Kirstein) were able to purchase a time share at Otter Crest, Oregon, and enjoyed vacationing there as often as possible. Otter Crest is still very much enjoyed by his children, grandchildren, and great grandchildren. Dad passed away on Tuesday, July 25, 2017, at the age of 88 ½. He is survived by his 5 children, 20 grandchildren, and 12 great grandchildren, as well as his siblings, Jack, Patricia, and Stephen, and cousins Lucile Nolan Neal, Juanita Nolan, and Betty Nolan Charters. The family wishes to thank Florin and Johanna Handolescu for their love and care of Harmon over the past 2 ½ years.

The family of Harmon Lee Day created this Life Tributes page to make it easy to share your memories.

Send flowers to the Day family.