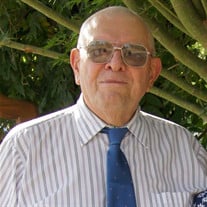 Harold was born to Joseph Wayne Bancke and Margaret Helen Sanetel at their home in Canemah, Oregon on May 1, 1932. Harold attended grade school at Eastham and graduated from Oregon City High School. He met Maurna Bjorling in high school. After graduation, they were married in Oregon City and started a family. Harold worked for the Forestry Service on the fire line and fire watch. He then served in the US Coast guard before beginning his career at Crown Zellerbach in West Linn. He worked his way up the ladder becoming a Millwright. Harold was elected President of the Local 68 AWPPW Union and served for several years. After his retirement, he and Maurna did a little traveling through Canada and Alaska. Harold enjoyed playing cards; Cribbage, Pinochle and Poker games with friends. He enjoyed gardening, starting his plants indoors in the dining room by the window, and then transplanting them into the large garden area he had prepared. As an only child, he grew up with many cousins on his mother’s side, the Sanetel family. He and his cousins would fish with self-made poles off the log rafts in the Willamette for Catfish and camped on Rock Island. Huckleberry picking trips were always a family affair; trips to Mt. Hood for huckleberries and mushrooms was an all-day adventure. Harold grew to love the outdoors, fishing the Hog line on the Willamette; digging clams, on Long Beach, WA, Hammond, OR and the shore of Alaska; crabbing in the bays of the northern Oregon coast. He fished many rivers of our bountiful northwest and most if not all the abundant lakes. In 1965 he started commercial fishing in the ocean and mouth of Columbia out of Chinook, WA, and Ilwaco, WA. Harold hunted many years with a bow and rifle for Deer and Elk in both Eastern and Western Oregon with his family and long-time hunting partner Fred McIntosh, who preceded him in death. He also hunted fowl of all sorts. In his love of family, he would include them in all he liked to do and was a great teacher, instilling that same love for the outdoors in his son and grandson. Harold enjoyed shooting so much. He entered in competitive shooting competitions, where he won many marksman trophies. He served as president of the Molalla Rifle Club 1962 to 1965. His experience served him well while he enjoyed his role as an NRA hunter’s safety instructor. It was important to him to give back to his community to carry on the traditions of outdoor life. Harold knew the importance of preserving all types of catch whether it be seafood, venison or fruit and vegetables. He and Maurna would can, freeze, smoke or otherwise process and preserve at the end of every trip. Harold answered to many names Son, Dad, Husband, Cousin, Friend, Grandpa, and Great-grandpa. He is survived by his wife of 67 years Maurna Bancke, daughter Diane Bancke and husband Jim Kremer, son Kenneth Bancke and wife Carol, grandson Tim Bancke and wife Cassie, granddaughters Christina Sartain and husband Matt, and Lori Bancke, great-grandchildren Lane and Gwen Bloom, Lexy Jones, Isabella and Lillian Bancke, and Paige Sartain.

Harold was born to Joseph Wayne Bancke and Margaret Helen Sanetel at their home in Canemah, Oregon on May 1, 1932. Harold attended grade school at Eastham and graduated from Oregon City High School. He met Maurna Bjorling in high school.... View Obituary & Service Information

The family of Harold Wayne Bancke created this Life Tributes page to make it easy to share your memories.

Send flowers to the Bancke family.