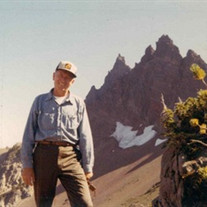 Our father passed away Monday, December 19th, 2011. We will miss him greatly. Harold Gordon Vohs, Jr. was born on the 21st of April, 1924 in Portland Oregon. He is the only son of Elisabeth and Harold G. Vohs. He is preceded in death by his parents and his only sister Mary who passed away last year. He was an Eagle Scout and graduated from Grant High School where he was active in sports including basketball, track, and skiing. He entered the Navy and trained as a fighter pilot, earning his wings on August 1, 1945 just as WWII ended and never seeing combat. He went to college on the G.I Bill and in 1949 graduated from the University of Washington with a bachelor of science degree in business. He married Margaret Little of Seattle and moved to the Bay Area to work in wholesale lumber with Stolte, Inc. His first son Gregory was born there and shortly after Margaret succumbed to the Polio epidemic. Hal returned to Portland. He met and married Emma Colvin of Vancouver, Washington, and the family moved to Eugene in 1955 where he started his clothing distribution business, National Knitwear in his garage. His children Bryan, Stephen, Susan, and Richard were all born in Eugene. Having been a ski instructor at Timberline Lodge, Hal was an avid skier and introduced his family to the sport on which they thrived. The family took weekend trips each winter to Mt Bachelor and traditionally spent a week in February each winter in Sun Valley, Idaho taking ski lessons. In the summer the family also enjoyed water skiing on nearby Fern Ridge Reservoir and regularly spent a week at Lake Shasta in northern California. There were fishing trips to the Cascade Lakes trolling for Kokanee and Rainbow trout. He was a fly fisherman and every Fall went elk hunting in the Blue Mountains with his employees. Hal took an active role in his children’s lives outside of school. He served as a mentor to Boy Scout Troop 177 and served as co-leader on several week-long 50-mile hikes along the Pacific Crest Trail in the Oregon Cascades. Later on his passion for backpacking extended to several family trips into the North Cascades and Olympics National Parks and the Mt. Jefferson Wilderness. He was an involved and supportive father. In 1977 he returned to his family farm in the Highland area of Beavercreek, Oregon where he nurtured and managed the family timber and agricultural land. He remarried again in 1986 and he and his wife Kay continued to live in the family farmhouse until his retirement to Sequim, Washington in 2000. He returned to live in Oregon City in the summer of 2009 to be closer to his children and grandchildren in the area and to once again be able to visit his beloved farm with its view of Mt. Hood. He is survived by his wife Kay in Sequim, Washington, his children Greg, Bryan, Stephen, Susan, and Richard and their families which include 12 grandchildren and 8 great grandchildren. PDF Printable Version

Our father passed away Monday, December 19th, 2011. We will miss him greatly. Harold Gordon Vohs, Jr. was born on the 21st of April, 1924 in Portland Oregon. He is the only son of Elisabeth and Harold G. Vohs. He is preceded in death by... View Obituary & Service Information

The family of Harold G. Vohs Jr. created this Life Tributes page to make it easy to share your memories.

Send flowers to the Vohs family.