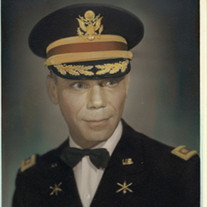 LTC USA RET Henry Marshall Threefoot died January 25, 2011. He was 92 years old and he was the last remaining member of his generation in the Threefoot family. He was the youngest of three born to Louis and Gladys Threefoot, a well-respected Jewish family in Meridian, Mississippi. The Threefoot family generosity and their active part in their town’s civic needs made them one of most admired families in Meridian. The family’s legacy, the Threefoot Building – the tallest building in Meridian, a magnificent example of Art Deco architecture listed on the National Register of Historic Places – was built as our country turned towards the Great Depression. Although it was never fully operational, the building stands in testimony to the lasting effect the family had on the face of Meridian. After his mother, “Dietie” and his father, Louis, divorced, his family lived for three years in Asheville, North Carolina, and then moved to California. Marshall graduated from Lowell High School in 1936 and returned to Meridian to work in his father’s business. In 1940 he joined the National Guard, and later that year was inducted into the Army, graduating from OCS (Officers Training School) at the end of 1942. He saw active duty in the Philippines during WWII. He often said that becoming an officer was the defining moment of his life - next to marrying his wife, Lorraine Dawe, in March 1947. Their four children were born up and down the West Coast: David in San Francisco, Judy in Portland, Nancy in Camas, Washington and Marshall in Hayward, California. He trained recruits at Fort Sill, OK during the Korean War, and then retired from active duty. After working different jobs, he accepted a job as a property manager at AVR Real Estate in Burlingame California, and later became realtor. He was also the Commanding Officer of the 49th Artillery Battalion of the National Guard of San Mateo. He raised his four children in the Bay Area during the tumultuous 1960’s, never losing his commander’s ways nor his sense of humor with the family. After losing his wife Lorraine to cancer in 1981, he remarried at the end of 1982. With his second wife, Marie (née Dettweiler) he moved to Minden, NV, and spent time at their condo on the Big Island of Hawai’i. After Marie died in 2003, Marshall lived for a time in West Linn and Oregon City before returning to Kailua-Kona. He came back to Oregon for the last time in May of 2010 and lived at The Stafford in Lake Oswego until his death. Marshall was a man who loved life, and lived as much as he could and for as long as he could. He made friends of strangers, family out of friends and was cherished for his kindness and sense of humor. He was able to find that one place in a person’s heart and resonate with them. Marshall never lost his Southern way of speaking nor his “Come in and sit down” chivalrous ways. He is survived by his children, David (Eileen), Judy Schumann (Bill), Nancy (John Dewes) and H. Marshall (Barbara), as well as seven grandchildren and one great-grandchild. Donations in Marshall’s memory may be made to the American Heart Association or Providence Willamette Falls Hospice. PDF Printable Version

LTC USA RET Henry Marshall Threefoot died January 25, 2011. He was 92 years old and he was the last remaining member of his generation in the Threefoot family. He was the youngest of three born to Louis and Gladys Threefoot, a well-respected... View Obituary & Service Information

The family of Henry "Marshall" Threefoot created this Life Tributes page to make it easy to share your memories.

Send flowers to the Threefoot family.