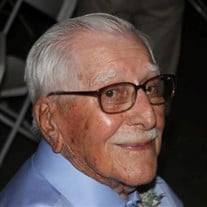 “There Wasn’t A Discombuberator He Couldn’t Fix!” Winning this year’s hunting lottery, on the 24th April, 2018, I.S. “Bud” Gefroh slipped out quietly, in the early hours of a fine Spring morning to join his fellow sports enthusiasts in the Hunt of Eternity. As he passed peacefully into the great forest of the sky he was surrounded by his children, grandchildren, his loving wife Kay of 68 years and most surprisingly that ever-elusive large Roosevelt Elk that he and his sons had stalked but never sighted in all those years in the woods. Born and raised in Karlsruhe, North Dakota, Bud was one of twelve children to August and Sybilla Gefroh. In keeping with this tradition, a crazy Gefroh scheme to repopulate the earth (after all who doesn’t love a gaggle of Gefrohs sprouting up?), Bud would go on to have twelve children of his own. But then again that was just Bud, he was a hunter and hunters don’t shoot blanks! Bud loved three things: his family, card games and being outside. Before he was married, Bud spent many of his younger years supporting his family through the Great Depression by taking part in Roosevelt’s “New Deal”, working for the Civilian Conservation Corps as they developed some of our greatest National Parks. During the short breaks of this hard work he would learn to play poker and later use this new skill to great effect in the Navy where he would rake in the wages of his fellow shipmates. Okay I know we said there were three things he loved, but it was actually more like six, so let’s just go ahead and add beer, cigarettes and baseball (Go A’s) to the growing list of the things he loved. Newly discharged from the service and clearly still on a winning streak, Bud met and married the beautiful Kay Bossert, herself one of twelve children. Kay’s adventurous spirit encouraged Bud and their ten children to head West to more fertile hunting grounds. In fact, so fertile was this move that he and Kay would have two more children in Oregon, finally rounding out the dozen. Not bad for a man whose idea of Date Night with Kay was a game of pool (ok many games) and a cold beer, also many, at the local tavern. A great part of Bud’s success in life was his charm and his ability to sell. His wife often commented that Bud was such a salesman that “he’d sell you the shirt off your own back and you’d thank him for it!”…which is strange to think about, because for someone who spent so much time selling people back their shirts, he never tired of his own, a navy blue, lumberjack plaid special, size 40R. When not working the graveyard shift as a machinist for Bingham Willamette, Bud’s life in Oregon was filled with family, fishing, hunting and gardening. And boy did he love that garden, especially with all his “little helpers”, back when child labor was legal, or so we were told! He embraced the simple things in life and cherished the times when he and all of his family could be together. Bud will be missed for his witty sense of humor, generosity and immense joy of life that lives on through his amazing wife, their twelve children, twenty-seven grand children and seventeen great grandchildren. In lieu of flowers please make a donation to the Church of Resurrection “helping hands” in honor of Bud Gefroh.

The family of I.S. Buddy Gefroh created this Life Tributes page to make it easy to share your memories.

“There Wasn’t A Discombuberator He Couldn’t Fix!”

Customized sympathy cards. Mailed for you.