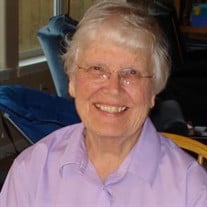 Irene Eveline (Roberts) Hall of Oregon City, Oregon, died on April 9, 2021, at the age of 91. She was born August 26, 1929, in Wahoo, Nebraska to Walter and Mabel (Bern) Roberts. Irene graduated from Wahoo High School in 1948. She attended the University of Nebraska in Lincoln where she majored in music and violin and received a Bachelor of Music in Education in 1952 and a Master of Music in 1956. Irene married Ralph L. Hall on August 16, 1952, at Bethlehem Lutheran Church in Wahoo. After their marriage they worked and lived in three Nebraska towns: Beaver Crossing, Coleridge, and Norfolk. In 1960, they moved to New York City to continue their education at Columbia University where Irene earned a Professional Diploma in Music Education. In 1962, they moved to Miami, Florida to work for Dade County Public Schools. In 1975, they moved to Oregon City, Oregon where Ralph worked for Oregon City Public Schools and Irene gave private music lessons. Irene’s love of music began early in life. She began playing the piano and violin at age eight and the flute at eleven followed by the organ, piccolo, and guitar. She taught public school music in Nebraska and Florida and spent eighteen years giving private music lessons in Oregon. She played in local chamber music groups, orchestras, bands, trios, quartets, and quintets wherever they lived. Irene enjoyed hosting special meals for her family, tatting, embroidery, playing bridge, scrabble & cribbage, bowling, golfing, and traveling. She and Ralph traveled throughout the UK, Europe, and the United States. Irene is survived by: her daughter and son-in-law, Kristine and Chris Peitz of Oregon City; grandchildren, Jeff of Salem, Mark of Bend, and Kimberly of Running Springs, CA; brother-in-law and sister-in-law, Kenneth and Elvira Hall of Albany; five nieces and nephews. She was preceded in her death by: her husband of 58 years, Ralph; brother and sister-in-law, Howard and Mary Ann Roberts; brother-in-law and sister-in-law, Arley and Linda Hall; niece, Sandra Gavett. She will be privately laid to rest with Ralph at Willamette National Cemetery.

The family of Irene Eveline Hall created this Life Tributes page to make it easy to share your memories.

Send flowers to the Hall family.