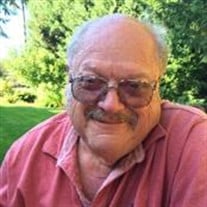 On Saturday, January 11, 2020, our beloved brother, uncle, father, husband, and grandfather, Jack Albert Palmer of Portland, OR, died suddenly of a heart attack at his home in Aurora, OR at the age of 78. He was born the third child of Margaret and Ted Palmer with two older sisters, Jeanette and Marlene and grew up in the Woodstock neighborhood of SE Portland. During his high school years, he apprenticed with a heat treating company in the neighborhood and became a heat treater as his profession shortly after graduation. He managed the heat treating business, LaBarre Heat Treating, for many years and eventually bought the company from the owner and expanded it into a very successful business with all of his hard work and dedication. He married Joella Morton in 1963 at the age of 22 and went on to have two children, first a boy Todd and a girl, Lori, over the 35 years they were married. He had many loves during this time that carried over from his youth, deer hunting every year at Dixie, fishing at the Metolius and spending time creating a landscape wherever he lived that was lush and beautiful, to include many ponds and waterfalls custom created and built by him in his spare time. He became a grandparent for the first time in 2002 to Riley, and a couple of years later with a second granddaughter, Sidney. Both carrying on many of the Palmer traits, Riley with her beautiful blue eyes and Sidney with a smile to light up the room. He shared his love of fishing and camping with them from the time they were babies. He retired from his business in the early 2000s, got remarried and moved to a property in Aurora, OR with his new wife, Linda. They were married for 10 years during which they and added chickens and several adopted cats to the family along with their golden retrievers. They both enjoyed the quiet life away from things on their 2-acre property. Linda succumbed to cancer after many years leaving him alone to spend his spare time beautifying his property in Aurora, adding a fish pond and beautiful plants throughout the expansive yard and taking care of his oldest sister Jeanette along with spending time helping neighbors and friends. In 2016, he met and married his current wife Karen. He spent his last years with Karen enjoying her company, loving nature and dreaming of having adventures on the road in their new camper. Their partnership was something that brought him great happiness and they seamlessly helped each other through sickness and health like the true partners they were. Although suffering from health issues in the last year, he was at his happiest and most content. He is survived by his sister Marlene, his wife, Karen, son and daughter, Todd and Lori. stepdaughters, Stephani and Michelle and his grandchildren, Riley and Sidney.

On Saturday, January 11, 2020, our beloved brother, uncle, father, husband, and grandfather, Jack Albert Palmer of Portland, OR, died suddenly of a heart attack at his home in Aurora, OR at the age of 78. He was born the third child of Margaret... View Obituary & Service Information

The family of Jack Albert Palmer created this Life Tributes page to make it easy to share your memories.

Send flowers to the Palmer family.