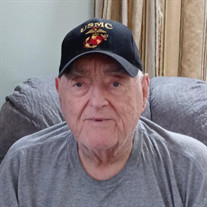 James Edward Schreiber, Marine Corps Veteran and lifelong volunteer, passed away in his home on August 25, 2021. Jim was born in Riceville, Iowa on September 7, 1940, and moved to Oregon in 1948. He and his family eventually settled in Beavercreek, Oregon where he maintained and cherished the farm and timber lands throughout the rest of his life. He graduated from Colton High School before serving in the Marine Corps and Marine Corps Reserves. He later received a degree from Cal Tech in Industrial Engineering and continued his education at MIT and Portland State University taking courses focused in Tribology, Cryogenics, Thermodynamics and Business. He then went on to receive an Associate’s Degree in Fire Science at Clackamas Community College. Jim met his wife, Carole, in 1957 and married in 1961. They celebrated their 60th wedding anniversary in February. They have one daughter, June. Most of his working career, 30 years, was spent with Castrol Industrial Division of British Petroleum (BP) and as the Sr. Field Services Engineer for the western US as well as the Lead Engineer for the Global Field Support Team. In retirement he was frequently on retainer for consulting services. Jim dedicated most of his life to volunteering. He was a volunteer firefighter and eventually Fire Chief for the Clarkes Fire Department/Clackamas Fire District #68 with 30 years of service, He was also a life member of the Oregon Fire Chiefs Associations as well as the International Association of Arson Investigators. He was a member of the Colton School board for 10 years, was on the budget committee for 25 years, and served one term on the county planning commission. He was also a proud member of the Small Woodlands Association. Jim enjoyed maintaining the family farm and timber lands, fishing, woodworking, photography, travel, and spending time with family. He leaves behind his wife, Carole Schreiber, daughter, June McCoy, son-in-law, Paul McCoy, grandchildren, Megan, Haley and Rachel McCoy, and twin sisters Jane Kirchhofer and Judy Wilson. He will be remembered and missed by many. If you would like to receive information about an upcoming celebration of life (dependent on COVID safety) for Jim, please leave your contact information. Thank you!

James Edward Schreiber, Marine Corps Veteran and lifelong volunteer, passed away in his home on August 25, 2021. Jim was born in Riceville, Iowa on September 7, 1940, and moved to Oregon in 1948. He and his family eventually settled in Beavercreek,... View Obituary & Service Information

The family of James Edward Schreiber created this Life Tributes page to make it easy to share your memories.

Send flowers to the Schreiber family.