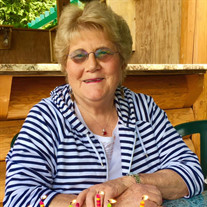 Janice Violet (Colarchik) Macken , age 84, of West Linn, died unexpectedly on March 21, 2018 of natural causes. Jan was born in Sydney, Montana on July 3, 1933 to Andrew and Christine Hanto, the 5th of 6 children. While attending Montana State University to become an RN, she met Klint Colarchik and they were married in 1956. During the following years they had two boys and moved to West Virginia before landing in Los Angeles, CA where Klint intended to pursue his music career. In 1964, Klint passed away suddenly and Jan, moved to Portland, OR with her two rambunctious boys (7 & 5) to be near her sister. She set about raising her boys as a single mother and began her 32 year career as a surgical nurse at Providence Hospital where she distinguished herself as a competent and conscientious professional. In 1968 Jan married Jim Macken and they moved to West Linn where she would live for the rest of her life. In her younger days she loved to sew and throughout her life always enjoyed the satisfaction of maintaining a beautiful yard. Trips to her beach house in Pacific City, following the Portland Trailblazers and dining out or shopping with friends and family were some of her favorite pastimes. Family was always the priority. She looked forward to the numerous family events including birthdays, holidays, youth sports and especially the major life events (weddings, births, etc.). She was always available to offer support, encouragement and help where she could. Jan is survived by her two sons and daughters-in-law, Ron & Vicki Colarchik and Rick & Sarah Colarchik, all living in Oregon City, along with her brother and sister-law, Don & Anne Hanto of Tampa Bay, FL; her brothers-in-law and sisters-in-law Dean & Rosa Colarchik of Hayward, CA and Jerry & Kathleen Macken of Newberg, OR. Jan is also survived by 6 grandchildren Jason (Kristy) Colarchik, Daniel (Crystal) Colarchik, Casey (Angie) Colarchik, Kimmie (Andy) McCallum, Korina Colarchik and Tony (Ally) Patterson) along with 12 great grandchildren, one great great child and numerous nieces, nephews and their children. Jan left us way too soon. She will be dearly missed and the void she has left will never be filled. A funeral is scheduled for 10 a.m., Thursday, April 5, 2018 at Resurrection Catholic Parrish, 21060 SW Stafford Rd., Tualatin, OR 97062 with luncheon to follow. A private internment will be held at Willamette National Cemetery. In lieu of flowers, the family asks that you contribute in Jan’s memory to the Alzheimer’s Association (alz.org).

The family of Janice Violet Macken created this Life Tributes page to make it easy to share your memories.

Send flowers to the Macken family.