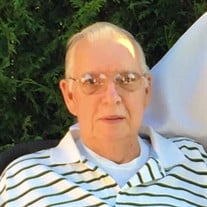 Jerry Turner lived for the past 47 years in Oregon City, Oregon. He died on August 13, 2021 at the age of 86. Jerry was born November 26, 1934 in Oregon City, Oregon to Anna Matley and Norman Turner. He is the oldest of three children. After graduating in 1952 from West Linn High School, he married the love of his life, LaVonne Richardson, on May 29, 1954. Together they had five children, Rod, Teresa, Rick, Wayne, and Nadine. Jerry worked in many fields including in a lumber yard, on a river boat, as a volunteer fire fighter/captain for the West Linn Fire District in the 1960s, teaching first aid classes, portraying Santa Claus, followed by positions at B.P. Johns Furniture, and finally retiring in 1997 after 25 years of service at United Grocers. Over the years, Jerry enjoyed going fishing, camping and to fairs/rodeos with friends and family but mostly he just loved people watching. Jerry was preceded in death by both his parents, Norman and Anna, his brother Lanny “Rex”, as well as his daughter Teresa. He is survived by his wife, LaVonne, sons Rod (Joyce), Rick, Wayne (Debbie), and daughter Nadine (Dean), as well as nine grandchildren Tamara, Teresa, Chris, Mackenzie, Abbi, DJ, Whitney, Courtney, and Shelby. Jerry was a loving husband, father, grandfather and will be greatly missed. He was one of the good ones!

The family of Jerry Michael Turner created this Life Tributes page to make it easy to share your memories.

Jerry Turner lived for the past 47 years in Oregon City, Oregon....

Send flowers to the Turner family.