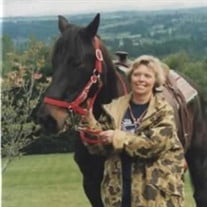 On Monday, May 31, 2021, a much-loved mom, sister, aunt, and grandmother, Joella Lee Palmer of Portland, OR, died due to complications from covid and Parkinson's. She was born the first child of Dee and Loraine Morton, they later welcomed her baby brother, Doug two years later. She grew up in NE Portland and attended Grant High School. After graduation from high school in 1958, she started her college education at Oregon State University and joined the Chi Omega sorority. She graduated from Oregon State in 1962 with a bachelor's degree in Liberal Arts and during that year, she met and married, Jack Palmer. During her marriage, she had two children, Todd born in 1966, and Lori in 1968. The family moved to Milwaukie, OR while the children were small and she and Jack continued their career pursuits. Joella took a job at the College of Legal Arts and took on many roles during the years there and eventually ascended to the school administrator. She also devoted herself to helping Jack with management and accounting for the heat treating business they purchased in the early ’80s. Once they became “empty nesters”, Jack and Joella moved to Estacada to follow their dream of living on land and expanding their family of pets to include several horses, many dogs, a llama, an Asian deer, and a multitude of birds which would the love of their life and kept them very busy. Joella rekindled her love for horses from her youth and spent as much time as she could riding her horse, Chief in the park below where they lived. She and Jack divorced in 1998 and Joella moved to Damascus, OR with two of her horses and her beloved dog, Dixie (golden retriever) and continued her adventures with her horses and friends, frequently taking the horses to the beach, going with friends to a “dude” ranch and coordinating a trip through the Oregon Trail with covered wagons. During that time both Todd and Lori got married and she became a grandmother or Oma when Todd and his wife Christa had Riley in 2002 and Sidney in 2004. While enjoying her time as a grandmother she also filled her time volunteering at both Guide Dogs for the Blind and Goldenbond. Her adventures continued with a trip to Africa and a 100-mile walk in Holland with her sister-in-law, Mary Lou Morton. Sadly, during this time she discovered that she had Parkinson's and she was forced to slow her life down a bit. She continued to be active through the early years with Parkinson's and then began to struggle to live on her own and determined it was time to move closer to town. She moved back to the Milwaukie area into an assisted living community where she lived for several years. During her final years, she moved from the assisted living community to Oregon City Adult Care near her son Todd. Joella is survived by her brother Doug and his wife Marylou and their children Sarah, Clark, and David, her children, Todd and Lori, their spouses Christa and Darren, and her grandchildren, Riley and Sidney. In lieu of flowers, please donate to one of her favorite charities: Guide Dogs for the Blind: https://www.guidedogs.com/ Golden Bond Rescue: https://goldenbondrescue.com/ Or to Parkinson's research at the Parkinson’s Foundation: https://www.parkinson.org/

On Monday, May 31, 2021, a much-loved mom, sister, aunt, and grandmother, Joella Lee Palmer of Portland, OR, died due to complications from covid and Parkinson's. She was born the first child of Dee and Loraine Morton, they later welcomed... View Obituary & Service Information

The family of Joella Lee Palmer created this Life Tributes page to make it easy to share your memories.

Send flowers to the Palmer family.