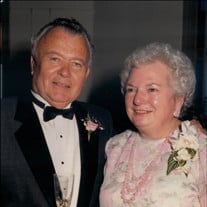 John Richard Barry October 17, 1920 - November 6, 2017 John R. Barry ("Jack") was born in Oregon City, Oregon on October 17, 1920, the third of three children born to Charles and Nora Barry. Jack grew up in Oregon City where he attended St. John's Catholic elementary school until the family moved to Jennings Lodge, Oregon. He attended West Linn High School in West Linn, Oregon where he graduated in 1938. He initially attended Washington State University in Pullman, Washington but after his freshman year he transferred to the University of Oregon in Eugene, Oregon. A member of the Sigma Chi fraternity, his college education was interrupted by WWII where he served for four years in the US Navy as a Motor Machinist's Mate First Class. Upon his return from the Navy, Jack completed his college education with a Bachelor of Arts Degree in History and Sociology from the University of Oregon. In 1947 he met Florence Marasco ("Pat") of Portland, Oregon and after a whirlwind courtship they were married on July 17, 1948. Setting up their home in Gladstone, Oregon, they had two children, Timothy, born in 1950, and Patricia, born in 1954. Jack worked his entire career as a salesman and he was always popular with his customers. Starting in 1955 Jack's job selling school supplies caused him to move the family from Gladstone, Oregon to Seattle, Washington then to Spokane, Washington and then finally back to Milwaukie, Oregon where in 1962 he and the family settled down and remained in the same house for the next 50+ years. Upon returning from Spokane to Milwaukie Jack moved from selling school supplies to selling wholesale food. He spent the next 22 years successfully selling wholesale groceries and restaurant supplies, retiring from S.E. Rykoff (SERCO) in 1984 at age 64. He and Pat enjoyed retirement together until Pat passed away in 1997. Remaining active and in generally good health well into his 90's, Jack continued to enjoy spending time with friends and family, traveling, good food, golf, the Oregon coast and U of O football. Jack was preceded in death by his sisters Marian and Bonnie Jean. He will be laid to rest in a private burial ceremony attended by his immediate family in St. John's Cemetery in Oregon City. Jack is survived by his two children, Timothy and Patricia and her husband Jeremy as well as Jack’s numerous cousins, nieces, nephews and other relatives. A memorial celebration of his life for family and friends will be held after the first of the year at a time and place yet to be determined. If you would like to make a donation to the charity of your choice in Jack’s name, we know that he would greatly appreciate your generosity. We will all miss him very much.

The family of John Richard Barry created this Life Tributes page to make it easy to share your memories.

Send flowers to the Barry family.