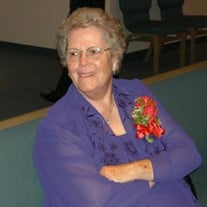 Joyce Laverne Moore passed from this life into the next, in her home, February 11, 2022, with her daughter-in-law, Cassy by her side. She was born in Cove, AR on August 30, 1934 to Loyd and Nolus Clark. Over her childhood years she spent much of her time between Arkansas and Southeast Oklahoma. It was in Bethel, OK, that she met the love of her life, Glenn Moore. They would marry August 28, 1951 and embark on the greatest adventure of their lives. In their early years together, they would live in Colorado, Kentucky, Arizona, Oklahoma, Arkansas, and then eventually would settle in Oregon. Through Glenn’s time in the military, they would grow together and develop friendships that would last her lifetime. With Glenn, she built a life that she loved as his wife and later as mother to their three children. She was a major contributor to each one of their successes as she engrained the importance of working hard, commitment to God, and staying true to their family into each of them. At her core, Jesus was most important, then came her family along with all those who became a part of her extended family. While she was not outspoken, she was strong… a strength built out of her dependance upon God. Even when she was faced with tremendous uncertainty upon the loss of her husband in 1984, she continued to trust God as she made one right decision after another while raising her 11-year-old son to adulthood and building a life of significance on her own. This strength was also magnified as she endured the loss of her second child Lori… serving her in every way possible throughout her illness. To the day she died, Joyce never thought too highly of herself or her efforts, but her impact was undeniable and has been multiplied across all she touched. She was employed later in her life at Sierra Vista Nursing Home for a short time and then with the Oregon City School District as a cook and as a transport cook. She developed many treasured relationships among those she worked with in each of those places. Each person that knew her, knew how she loved them… and in a bigger way experienced how God loved them too. She was a reflection of how good God could be, and never stepped away from an opportunity to extend forgiveness, give grace, and show love the way God had shown those things to her. Joyce was preceded in death by her: husband Glenn Moore; daughter Lori Dixon; grandson-in-law Mike Munsterman; father Loyd Clark; mother Nolus Clark; stepmother Margie Clark; brother Lawson Clark and wife Mildred; sister Mabel Christian; nieces Callie Morris, Charlotte Basar and Patricia Meyers. She is survived by her: daughter Karen Pool and husband Ron; son Duane Moore and wife Cassy; son-in-law Dee Dixon; grandchildren Erin Munsterman, Danielle Dixon, Ashley Dixon, Brittany Dixon, Joshua Moore and wife Kaitlyn, Caleb Moore and wife Alexis; sisters Rachel Davis and husband Steve, Ova Morris and husband Doyle; brother RL Clark and wife Deedra; numerous nieces, nephews and extended family. Joyce was a long-time member (almost 60 years) of Hillcrest Missionary Baptist Church. She loved her church family dearly and was so appreciative of the love they showed to her. Celebration of Life Services… Time; Wednesday, February 23, 2022, 1 PM Place; Hillcrest Missionary Baptist Church, 355 Warner Parrott Rd. Oregon City, OR 97045 Anyone who wishes to send floral arrangements, may send them to Hillcrest Church… or alternatively, donations may be made to Hillcrest MBC in Joyce’s memory.

Joyce Laverne Moore passed from this life into the next, in her home, February 11, 2022, with her daughter-in-law, Cassy by her side. She was born in Cove, AR on August 30, 1934 to Loyd and Nolus Clark. Over her childhood years she spent much... View Obituary & Service Information

The family of Joyce Laverne Moore created this Life Tributes page to make it easy to share your memories.

Joyce Laverne Moore passed from this life into the next, in her...

Send flowers to the Moore family.