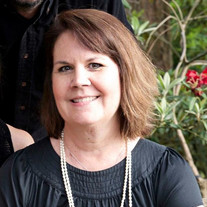 Kim Boyer, 57 died of pancreatic cancer February 12th, 2017 in Oregon City at her home. A celebration of life mass will be held at St. Ignatius Catholic Church (3400 SE 43rd Ave, Portland, OR) on Thursday, February 23rd, 2017 at 10:00 AM with Father John Ridgeway officiating. Reception to follow. She was born in Portland, Oregon to Carol Ann and Alvin John Mather on October 15th, 1959. She went to Clackamas High School and graduated in 1977. She worked for the last 20 years for Salem Media, KPDQ & The Fish Christian Radio. She enjoyed flower gardening, beach trips, and most of all, spending time with her family. Kim married Rich Wilson in 2010 and they were happily married for almost 7 years. Kim is preceded in death by her father, Alvin John Mather, her late husband John Stanton Boyer, and her brother Jon Tracy Mather. Kim is survived by her husband Rich Wilson of Grants Pass, daughter Sarah (Boyer) Heatherly of Hillsboro, son Jesse Boyer of Portland, mother Carol Mather of Happy Valley, sister Shawn Anderson of Clackamas, brother Todd Mather of Tualatin, grandson John Weston Heatherly, and many nieces and nephews. Private cremation was held. In lieu of flowers, memorial donations may be made to the Pancreatic Cancer Action Network Pancan.org

The family of Kim Teresa Boyer created this Life Tributes page to make it easy to share your memories.

Send flowers to the Boyer family.