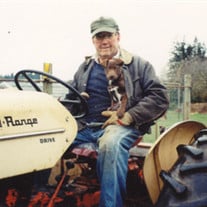 Leslie was born to Lester and Marvel Jensen, at his Grandparents home, south of Oregon City. He grew up in the Logan area, attending Upper Logan Elementary and Oregon City High school and after graduating High School in 1951 Leslie attended and graduated from Multnomah Bible College. He married his wife June on February 17, 1956. After college Leslie went to work at Rollin Lumber Company in Carver. When Rollin closed he went to work for Crown Zellerbach in Estacada, which became RSG Forest Products and retired from there in 1996. Farming was in his blood. He told of working the farm with horse teams when he was a young lad, and it was a big day when his father purchased a tractor to help with the work. When Leslie and his bride purchased their own property, he began farming that land and raised cattle for milk and food. It was a good thing too, because in the following years they had three boys and they needed that milk, meat and garden produce to keep up with the growing kids. When his parents passed, Leslie inherited their 40 acres. The family moved there where he continued to farm the land. He was at home in the fields, sitting on the tractor working the land. The boys grew up and then came the grandchildren and Leslie enjoyed them immensely. There are many pictures of him on a tractor giving the grandkids a ride on a trailer or had one of them on a tractor teaching them how to drive. Over the years Leslie has always had a dog, enjoying their companionship as he worked on the farm. Leslie is survived by his wife of 55 years June, sons Larry and wife Hallie, David and wife Janice and Philip, grandchildren Lane and Kendra Jensen, Daniel and Kristin Jensen, Amanda, Adam, Kate, and Gabriel Jensen and great granddaughter Hannah. Funeral service will be January 6, 2012 at 11:00 A.M. at Barton Community Baptist Church, 25400 SE Highway 224, Boring, OR 97009 (503) 637-3258. There will be a time of fellowship at the church following the service. A private internment will follow the time of fellowship. PDF Printable Version

Leslie was born to Lester and Marvel Jensen, at his Grandparents home, south of Oregon City. He grew up in the Logan area, attending Upper Logan Elementary and Oregon City High school and after graduating High School in 1951 Leslie attended... View Obituary & Service Information

The family of Leslie Earl Jensen created this Life Tributes page to make it easy to share your memories.

Leslie was born to Lester and Marvel Jensen, at his Grandparents...

Send flowers to the Jensen family.