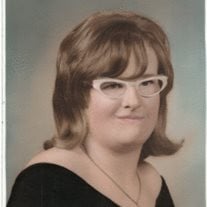 Linda Mae Enloe, passed away at Dixie Regional Hospital in St. George, UT early Saturday morning, October 2, 2010. She was born December 3, 1948 in Portland Oregon to Edward F. and Juanita Enloe. On May 24, 1969, she married Gerald Leroy Gould in Gresham, OR. They had one daughter, Melissa Ann Gould (Koontz) who was born on April 21, 1971. She was a member of the local Odd Fellows and Rebecca’s club out of Sandy, OR, and worked most of her life as a Certified Nurses Aid following the tragic death of her husband and friend Gerald Leroy Gould in July 1976. Linda loved to fish, hunt and camp. She spent many of her days hanging out with friends, listening to old time rock and roll and country music which was played throughout the home that she lived in growing up with her Father and Mother She is preceded in death by her parents, Edward F. and Juanita Enloe. Juanita Mae Enloe, passed away in 1990, her Father Edward F. Enloe, Sr. passed away on January 25, 2009. She is survived by her daughter Melissa Koontz (Matt) of Vancouver, WA, Brother Edward Floyd Enloe, Jr (Susan) of Kennewick, WA, two nieces Teresa (Mark) Zimbehl of Pasco, WA, and Carie Suazo (Josh) of Spokane, WA. PDF Printable Version

The family of Linda Mae Enloe created this Life Tributes page to make it easy to share your memories.

Send flowers to the Enloe family.