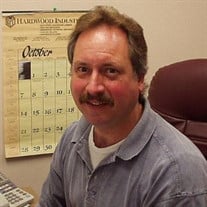 Loran Keith Krause was born in Prosser Washington on June 16, 1960 to Lenhart and Elaine Krause joining brothers Lenny and Larry and sister Karyl. Len was a High School Business teacher in Hood River, Oregon and was working in Prosser for the summer. Loran spent the first seven years of his life in Hood River when in the summer of 1967 his dad took a job at the Oregon City High School and they moved to a new home on Partlow Road. Elaine got a job teaching first grade at Mt. Pleasant Elementary School in Oregon City. Loran attended King Elementary, Gardiner Junior High and Oregon City High School. Loran loved playing baseball and enjoyed being the catcher. When he got his car he found jobs working at the record store and delivering flowers. After Loran graduated from Oregon City he attended Portland Community College and started working for Meier and Frank in the men’s suit department. He enjoyed the suit department and worked there the remainder of the time he was at Portland Community College and transferred to the Eugene store when he went to University of Oregon his junior year. He loved nice clothes and suits and believed in looking sharp. Loran did so well with sales at Meier and Frank that one of his repeat customers asked him if he would like to come to work in the lumber sales industry. Loran started out with Continental Hardwood Co. In 1989 he made the move to Hardwood Industries Inc. Loran remained with them until his death. He died from a heart attack on Sunday August 13th at his home that he had lived in for 28 years. Loran was involved with the Oregon City Jaycees and Elks Clubs. He frequented the Ice House and Trails End Saloon and had many friends that he has made a habit of telling bad jokes to for years. In 1997 Loran married Linda Reeder and their daughter Kendall was born the following year. The family spent many hours at youth sports and later in the competitive softball program. Loran had a customer who was selling a cabin up in the Puget Sound and asked Loran if he would be interested in buying it. Loran and Linda went up to visit Anderson Island and fell in love with the island. They didn’t buy the cabin but put an offer on the house around the corner that weekend, never really expecting they would get it. The house and community at Anderson Island fast became Loran’s favorite place to go and he would spend lots time with their friends up there. He enjoyed golfing with his neighbor, canoeing and fishing on the lakes and had an oyster bed in the Puget Sound. His funeral will be held at Oregon City Evangelical Church located at 1024 Linn Ave. on Saturday August 26th. His ashes will later be spread up at Anderson Island on the Puget Sound.

Loran Keith Krause was born in Prosser Washington on June 16, 1960 to Lenhart and Elaine Krause joining brothers Lenny and Larry and sister Karyl. Len was a High School Business teacher in Hood River, Oregon and was working in Prosser for... View Obituary & Service Information

The family of Loran Krause created this Life Tributes page to make it easy to share your memories.

Loran Keith Krause was born in Prosser Washington on June 16,...

Send flowers to the Krause family.