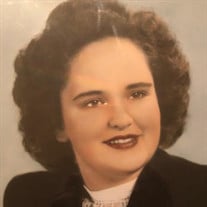 Margaret Mary Crisp December 1, 1930 - September 9, 2020 Margaret Mary Sumaeta was born in Boise, Idaho to Pedro and Maria Sumaeta. Her father was from Marquina, a city in the Basque province of Spain. Margaret often referred to herself as “the little Basco,” deeply proud of her heritage. Margaret’s mother Maria tragically died when Margaret was only eight years old, leaving her to care for her sister Rosie. They grew up in Jordan Valley, Oregon -- a place that was home to many special memories. Margaret and Rosie were sent to boarding school at St. Francis Academy in Baker City, Oregon, where Margaret eventually graduated in 1948. Growing up, Margaret’s friends and family lovingly referred to her as “Packy.” She earned this nickname by constantly packing rocks in her pockets, always ready to challenge anyone to a rock throwing contest. Packy’s rock throwing got her in trouble when she tried to throw a rock through one window and out the other of a vehicle passing by… and ended up hitting the innocent driver. Margaret’s rock throwing did eventually come in handy when she played softball in high school. She passed down her talent to her daughter Georgene (Packy 2.0), the athlete of the family. Margaret was also a member of the debate team and often lamented the tragic time when she lost a debate to a boy. She passed her ambition and tenacity on to her eldest daughter Eva, who went on to win more than enough debates to make Margaret proud. Jeanne, Margaret’s second daughter, inherited her talent in finance management, stretching a dollar as far as it could go and managing to save even in the hardest of times. Charlene, her youngest daughter (and twin to Georgene), inherited her love of cooking -- but no one will ever make a pot of beans, cornbread, or Spanish rice quite like Margaret could. Scott, Margaret’s youngest child, inherited her sass and wicked sense of humor. He was a light to others, always spreading joy and bending the rules. She was proud of her children, and they were proud of her. Margaret met the love of her life, Charles Raymond Crisp, in 1946, and they were married on August 7, 1949 at St. Francis Cathedral in Baker City. Together they lived in Portland, Oregon until they moved to the family farm in Carver, Oregon. They spent their time tending to gardens, farm animals, and their five children. They were married 64 years when Charles died with Margaret by his side on November 29, 2013. The love story of two best friends was put on hold that day -- oh how they must be rejoicing to be together again now. Margaret was a brilliant woman with a deep love for learning and was an avid reader. She was often reading several books at a time and couldn’t wait to see The New York Times Book Review to find out what might be next on her list. She was a champion for women and social justice, always bold and unashamed. She followed the Lord and was a beautiful witness of what Christ taught - to love all people equally. All who entered her home were undoubtedly provided a meal, her undivided attention, and something from the “fruit house” or freezer to take home. She was a treasured friend to so many. She loved her grandchildren fiercely and left a lifelong impression with her sassy, sometimes off-color sense of humor. If she heard complaining or whining, she would tell the offending grandchild to “get a life.” Her advice to them was always notable, but one stands out: “Be the best person you can be and learn as much about life as you can.” She will be missed, but never forgotten. Margaret joins her beloved husband Charles Raymond Crisp and her youngest child and only son Scott Crisp, who died of AIDS at the age of 29. She is survived by her four daughters, Eva Kripalani Warren, Jeanne Crill, Georgene Barragan, and Charlene McDevitt; grandchildren Cris Crill, CJ Crill, Erin Sanders, Gino Herrera, Madeline McDevitt, Sami Helms and Angela and Adrian Warren; great grandchildren Ava and Ella Sanders, Phoenix, Hendrix, Maxwell and Lynx Morgan, Kingston and Felicity Warren, Jesse Ogle, Lincoln Walker Helms and Melia Herrera. Member of the Barton Church and the American Legion Auxiliary Post 41 in Baker City, Oregon. No services to be held; internment with her beloved husband Charles at Willamette National Cemetery. Memorials may be made at Cascade AIDS Project in Portland, Oregon or American Legion Auxiliary Post 41 in Baker City. “Surely goodness and mercy shall follow me all the days of my life, and I shall dwell in the house of the Lord forever” Psalm 23

Margaret Mary Crisp December 1, 1930 - September 9, 2020 Margaret Mary Sumaeta was born in Boise, Idaho to Pedro and Maria Sumaeta. Her father was from Marquina, a city in the Basque province of Spain. Margaret often referred to herself... View Obituary & Service Information

The family of Margaret Mary Crisp created this Life Tributes page to make it easy to share your memories.

Send flowers to the Crisp family.